What Are You Thinking?

ReaperHunter said:
Do you dislike 3 or just not like it as much as the other 2?
Just wondering because I imagine that 3 is pretty divisive
Click to expand...

Yeah, 3 got a pretty polarising reaction from people when it first came out. I was on the side that did not like it. :(

I have the emotional strength of a slug right now and if another person asks me my thoughts on FIV, I'm going to throw myself into the sun. Not really, but I want to.

+ I need tea. And patience.

That I used to love being told I look like my dad a lot , but now the constant string of people bringing it up gets tiresome

So the pregnant duck at work had 14 ducklings and then naffed off.

Now she's back in her old nest outside my storeroom again because she's pregnant again. Only this time I have to hand feed her because she's too fat and lazy to get up and waddle over to the dish which is about 4 inches away from her face.

This job...just keeps getting more and more surreal every week...

Just made the decision that I'm not going to try the Commercial Law exam yet, I'm too close to burn-out. Just thinking that I might spend the last one and a half week playing some games before I have to travel elsewhere for my summer job. I haven't really had the time to even touch my PS4 for weeks.

V said:
I don't understand how they can stick a needle right into it and not "burst" it? Or have the stuff inside leak out. I suppose the jelly inside is solid and not pressurized liquid like we're made to believe in movies. I guess I thought it was something that'd just "pop" because of all the daft action movies that have scenes like that in.

Now I'm thinking about it.

You should watch "Dr Pimple Popper," and learn how these things work. Some pimples aren't meant to be popped. If you pop the wrong area, you can hit the artery, and die. That's one example, but other examples is that they are very stubborn in that if they don't want to come out, it won't come out and will cause pain. Intense pain. So, keep that all in mind.

However, Pimple Popper says that if you catch it earlier, it's much, much easier to "pop" it. That's why she asks how long have you had it. So, earlier = better.

V said:
Sometimes people block because of whoever someone has on their friends list or associates with.
I had someone on there ask me to unfollow them the other day for some weird reason, they didn't want more followers than they wanted to follow... it didn't make much sense. I mean if you don't want anyone following just put a moderation thing on who follows surely
Click to expand...

Yeah, I see this often in The Quartering's videos. In the past, he's been controversial in card/board games industry, and he's begun to target the game/film industry, so now everyone on Twitter hates him just or the mere fact that everything he says gets twisted and used against him for no reason other than controversy. Just unfollow this person who asked you to unfollow the other person because those people aren't good followers.

Rebel Dynasty said:
I'm thinking the association with someone they didn't like was probably the case. Which frankly is just juvenile at this point.

What gets me is, they can limit who follows them; I've had it happen where I went to follow someone, and it was pending until the person either accepted or declined. It can be such a good platform, but damn if it isn't a dumpster fire a lot of the time, too. Even when you try to stay well out of it, it drags you in. x_x

CT: On one hand, that sounds like an interesting prospect. On the other, if it's being approached from a non-fiction stance, I'd be way out of my depth. Guess there's no harm in asking him what he's aiming towards.
Click to expand...

You gotta understand, people on Twitter are very venomous. They could care less what you think is petty or whatnot. Right now, the echo chamber is springing the sound so loud that it tumbles down the hallway so everyone can understand this is not how "they operate." And the worst part is, 90% of the SJW's, in the Twitterverse are from UK, so you guys are getting the bad rap. The U.S. government doesn't realize that U.K./Germany/Russia are/is selling misinformation on Social Media in wildfires. It won't stop until either someone with brains at Twitter/whatever stands up and takes action, or the government takes action. It's not just affecting people's lives, its also businesses, brands, and economies.

As a matter of fact, this whole thing makes creating GDPR look dumb in retrospect, because of the amount of garbage, and the amount of abuse that goes on in there. I've been affected by this rise of SJW's and GDPR.
Last edited: Jun 6, 2019

Clearly giving in to that person's original RP request was a mistake, because now he seems incapable of taking my, "I'm not feeling it" and failing those, my silences for the "No" they are. >.< I wonder how blunt I'll have to get before it comes off as rude? Hopefully this next attempt will get through to him.

Rebel, I will post the book out to you in a couple of days.

V said:
Rebel, I will post the book out to you in a couple of days.

CT: Well, that was a nice little nostalgia trip. Such a little known book, definitely not perfect, but damned if I don't still love it after all these years.

I envy people who can tolerate and still eat badly made food. I just can't. I go in being hungry but the bad taste completely turns off the hunger preventing me from eating. I just am unable to force myself to eat something.
But then the hunger comes back with nothing but the prospect of bad food ahead.

I managed to get like a dozen bug bites on my feet while I was at the park last night. My brother usually likes to hassle me for wearing sandals when they don't go with the rest of my clothes and now he gets to say "I told you so."

I needed to buy a book to keep all my emails, passwords and usernames in. It's probably a foolish thing to do, but there are just too many to keep track of, especially when some sites just spontaneously force you to change your password because you logged in with a different account.

V said:
I needed to buy a book to keep all my emails, passwords and usernames in. It's probably a foolish thing to do, but there are just too many to keep track of, especially when some sites just spontaneously force you to change your password because you logged in with a different account.
Click to expand...

Loving mine! Just have to make super sure not to misplace the fella! 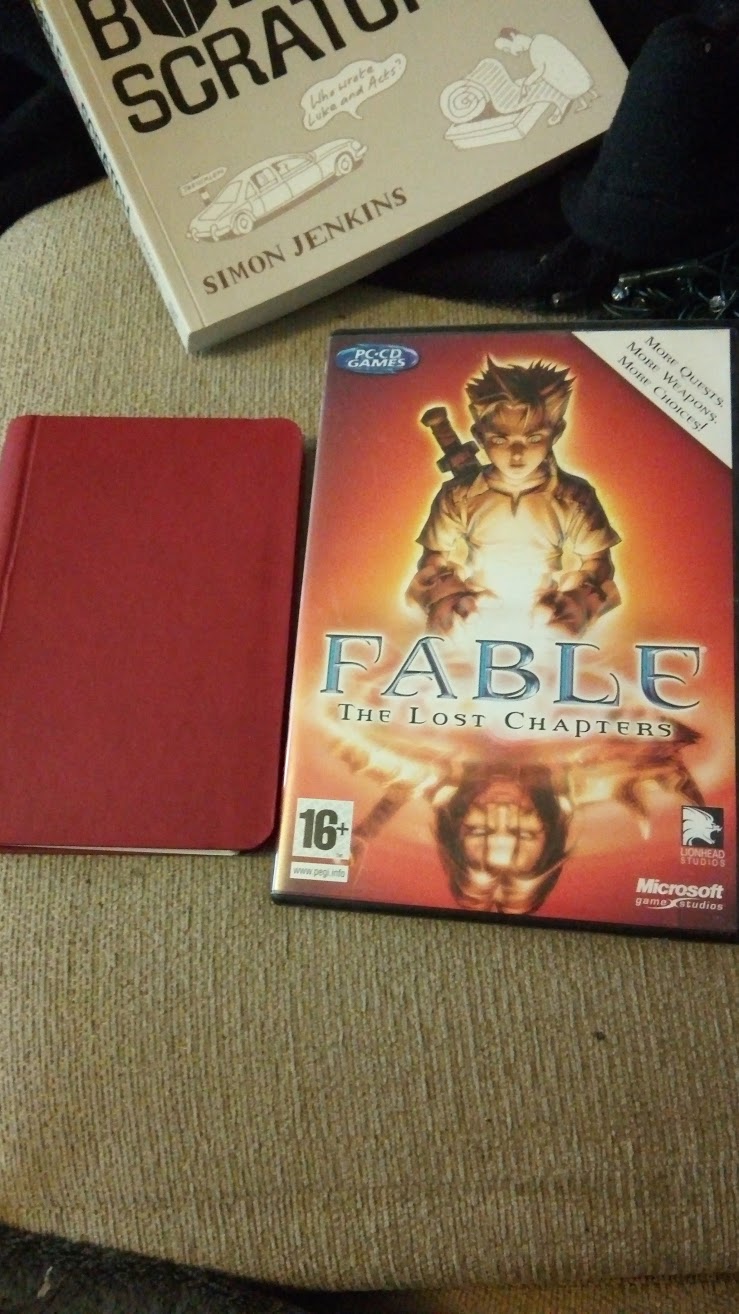 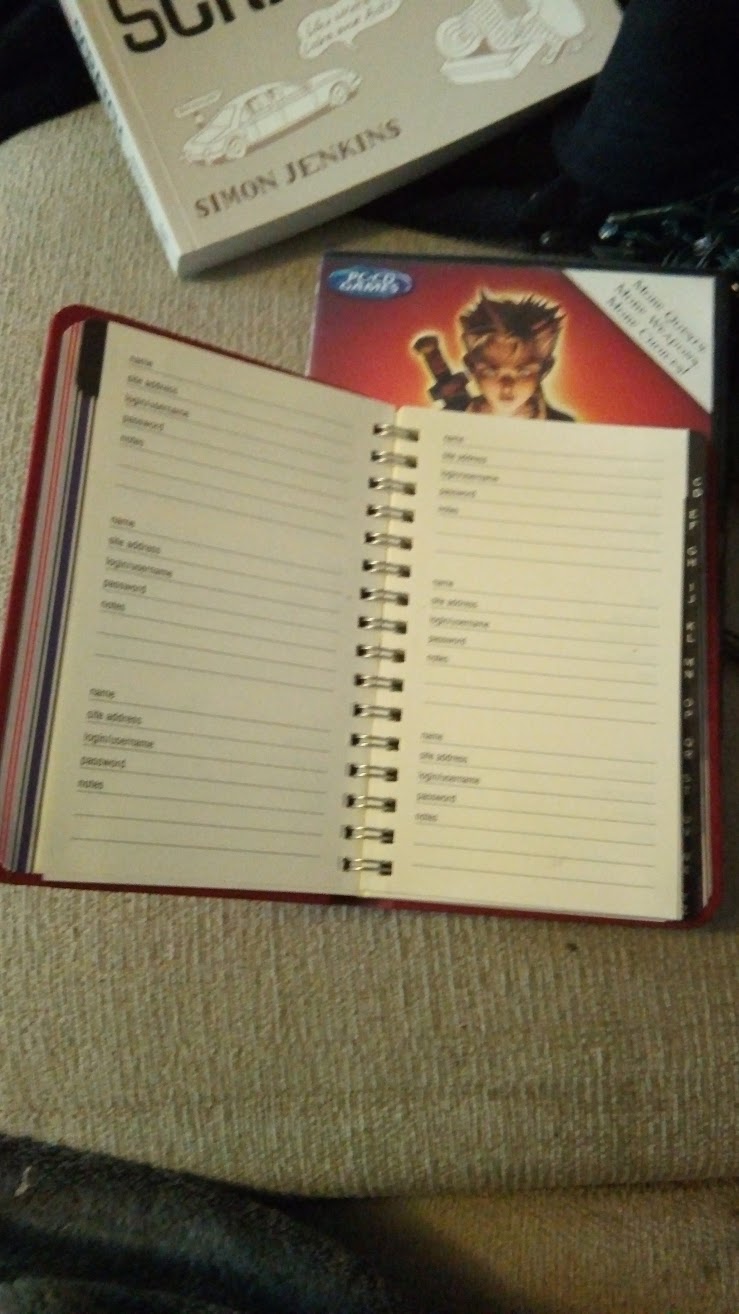 Loving mine! Just have to make super sure not to misplace the fella!

Interesting, could do with one of those myself actually.

Grandma's funeral was held yesterday. I was crying like a damn waterfall.

Two things made me think:

1. My grandma's sister said that in my grandma's last phone calls she told that "I'm tired, I want to go to mom and dad". So she knew she was going to die soon.
It was somehow comforting to hear this. I believe grandma's now home.

2. My uncle also told that grandma's brother (who wasn't present) had got a heart attack and was taken into hospital at the precise moment when grandma died, which was very interesting to hear.

I'm not too sad about the funeral anymore, I'm actually relieved. However, not to get too grim in this post, I am also thinking if we should arrange a cousin's meeting sometime at the summer

It would be nice to meet them again. We saw each other yesterday of course, but before that it has been like 15 years since we've been together. It's a shame, because in our childhood we were always spending our summers together (at grandma's house of course

Also thinking whether I should read The Handmaid's Tale or watch the series at summer. I'm not much into televised violence, so I'm kinda falling on the book.