Just a rehash of what's been said. It's the gameplay from the trailer but with the sound still in. 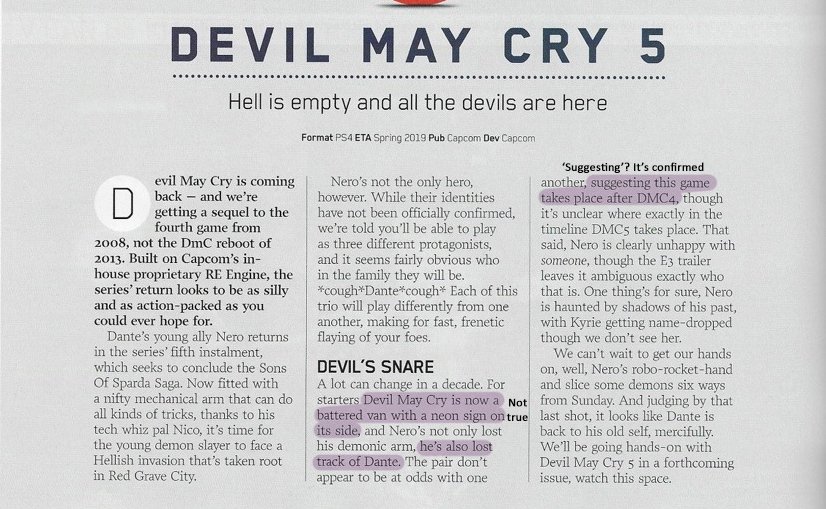 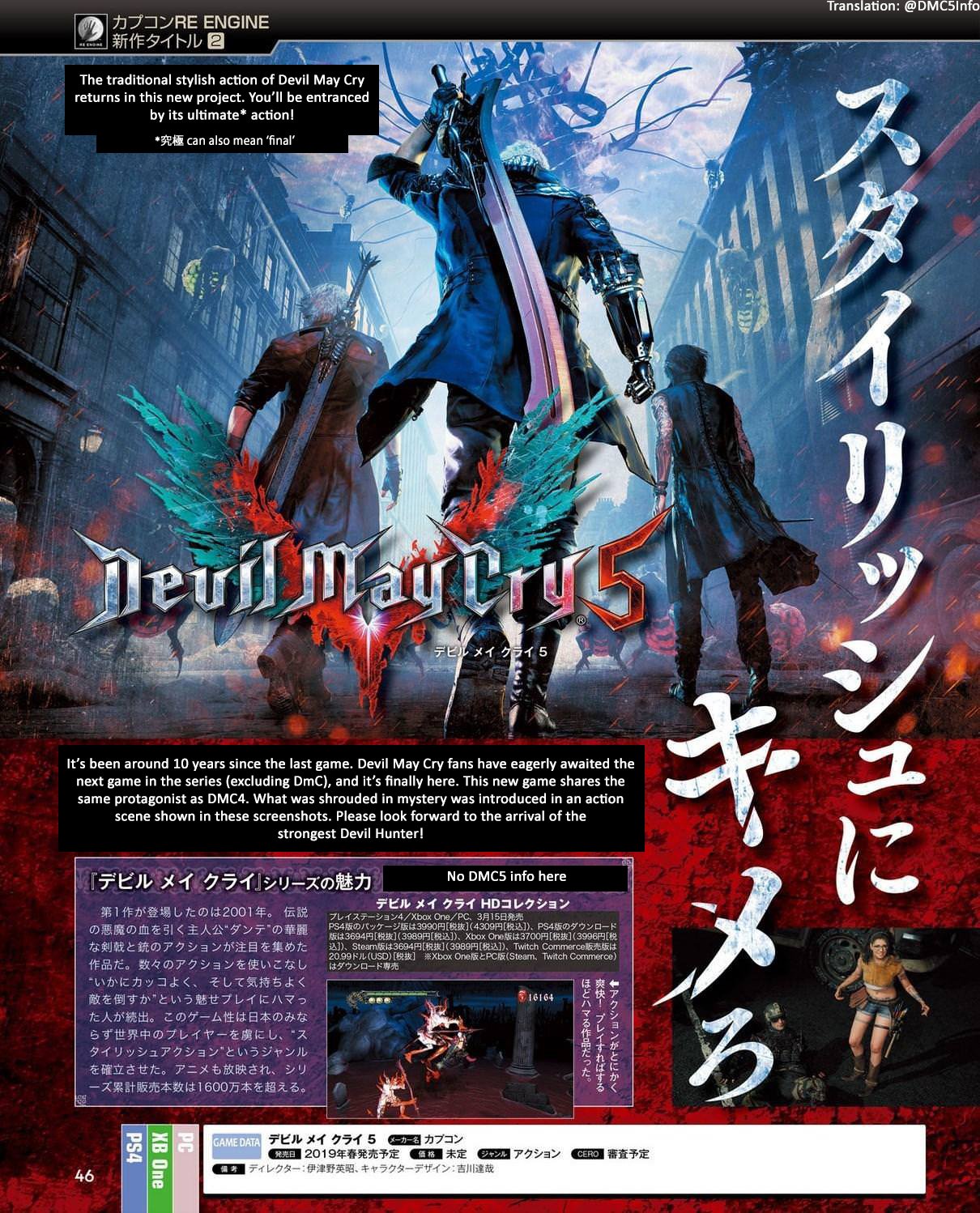 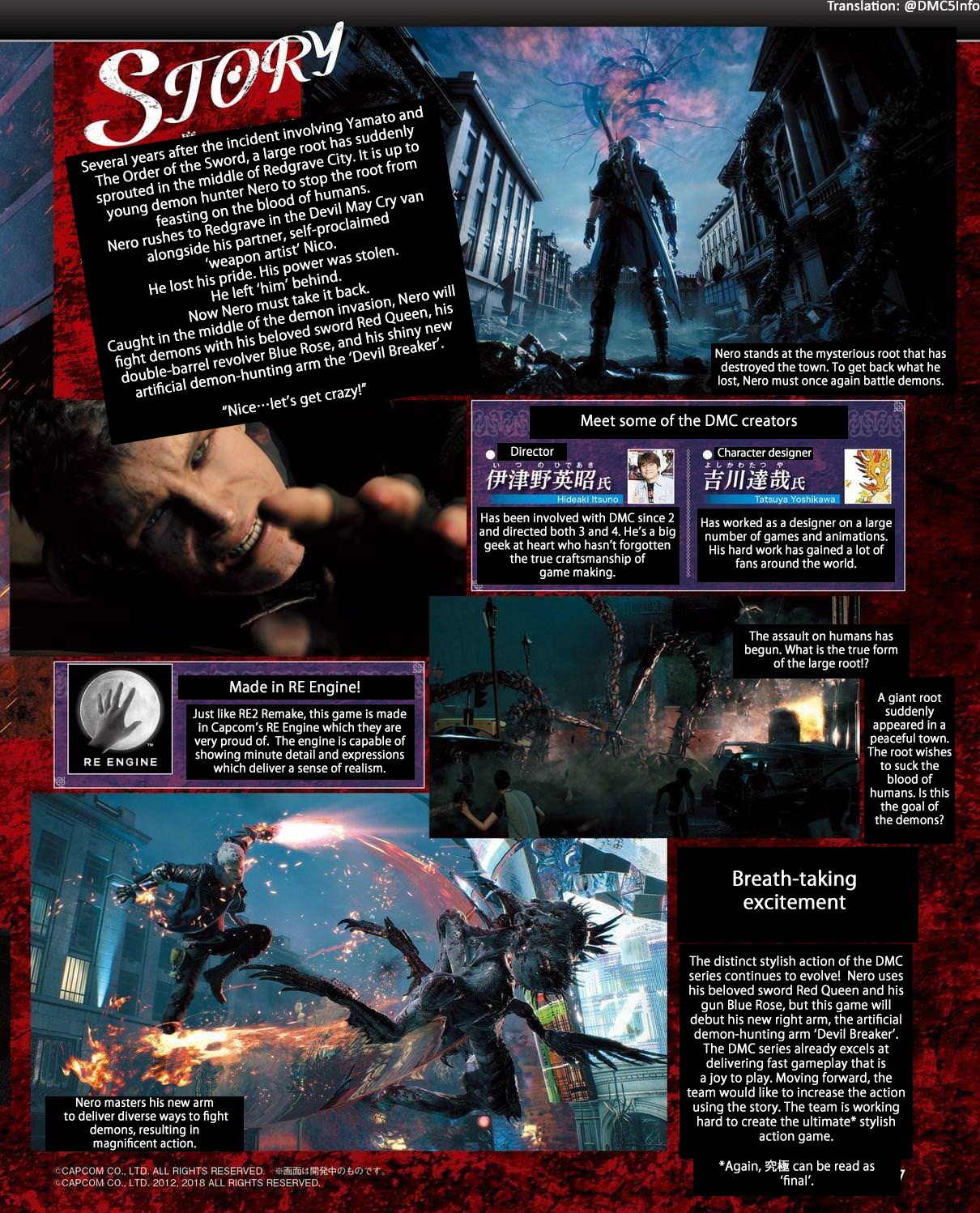 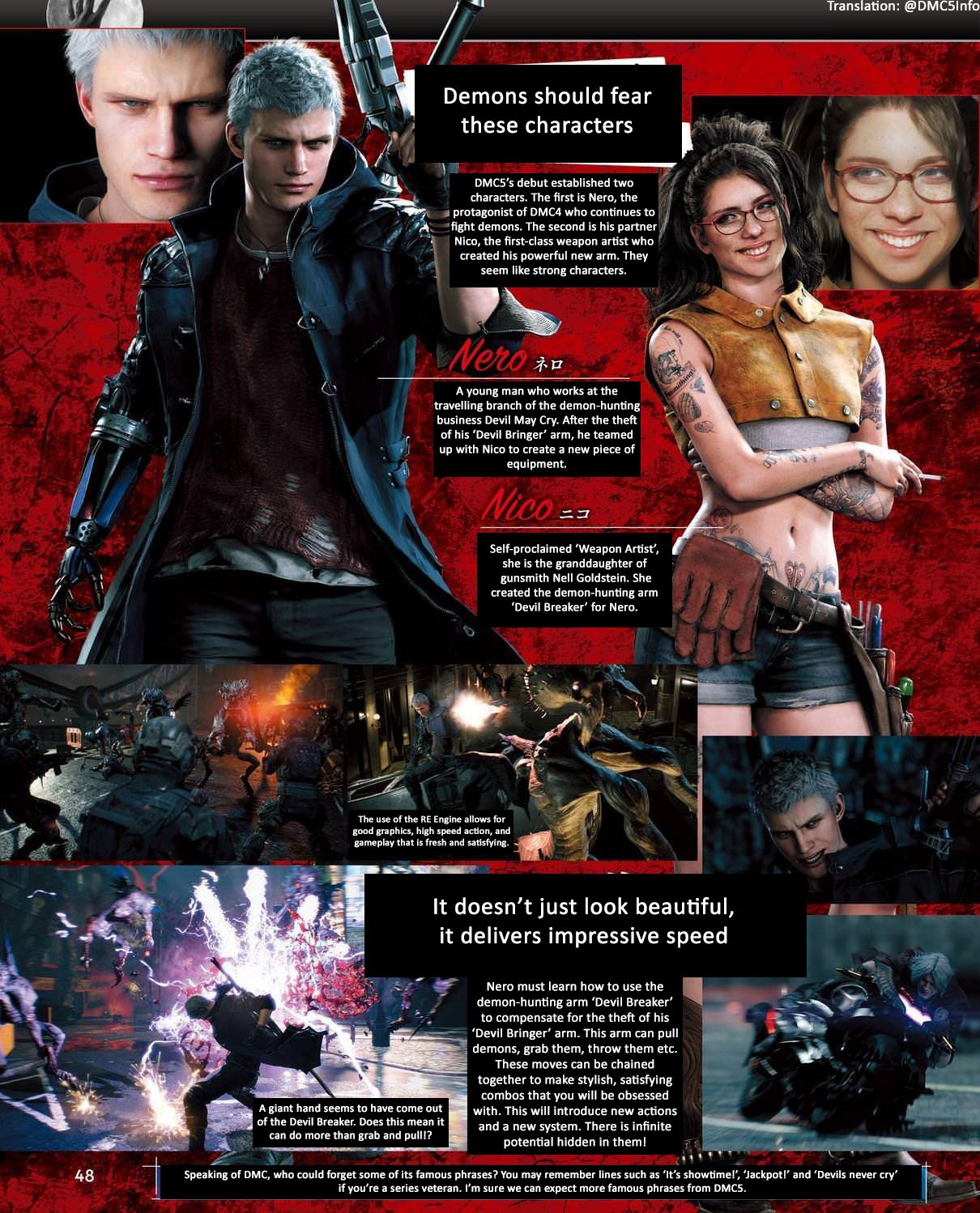 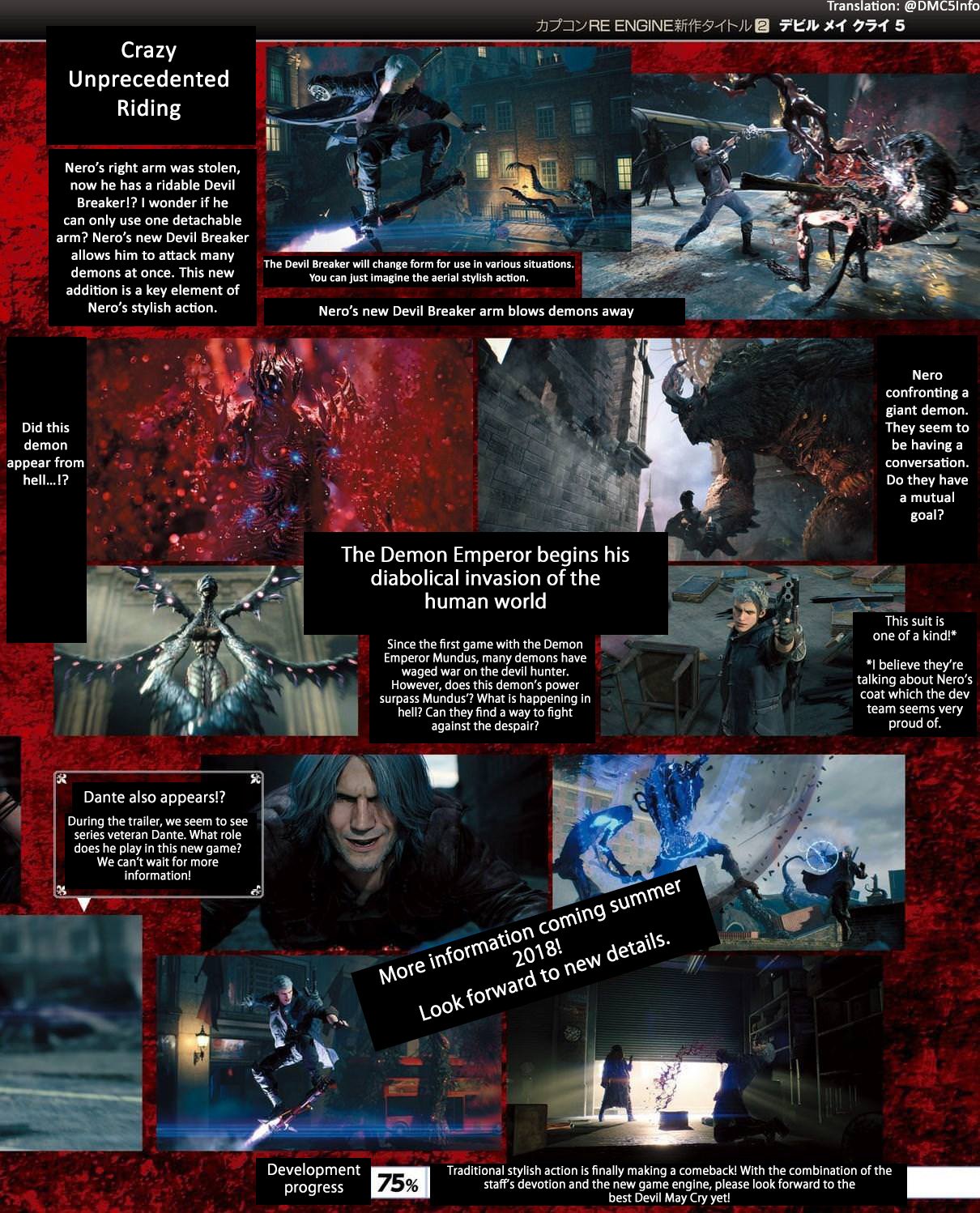 We should definitely thank the guy for the translation.
Last edited: Jul 8, 2018

4chan Rumor/Leak, wasn't sure if this is the right topic for this @berto please delete this post if necessary

>31 missions; 10 for each character separated into their own campaigns + a prologue/tutorial featuring Nero, not counted in his campaign
>Campaigns can be played in any order after the Nero prologue, but the recommended order is Nero > V > Dante in terms of the difficulty it takes to learn the characters
>gameplay is basically DMC4 but further enhanced and tuned, it feels really ****ing good to play
>Nero and Dante play as you’d expect, but with a bunch of new and improved moves. Nero’s arm functions pretty much identically to his old one except with more abilities due to having different arms he can use.
>V (full name Vitale) fights with summoning and spell casting. His basic attacks are ranged but deeper combos involve getting up close with cool moves like summoning a small demon inside an enemy and ripping it out. He can summon copies of enemies he’s targeting, and their health and AI effectiveness are determined by the move he uses. Advanced techniques result in summons that take more hits and have better AI.
>The aim with him was to provide a character who fights pretty much the exact opposite way to Nero and Dante but still feels exciting and challenging to master in an effort to expand the scope of what the series’ combat can achieve without weakening its focus.
>There is DLC planned, but currently not in development and won’t be until the main game is finished. Itsuno and the team intend for it to fall in line with the sort of content previously added in Special Edition releases like new playable characters, but nothing is set in stone yet and they plan to create this content based on fan reception to the main game.
>Itsuno also intends for this to be the last DMC game he directs, at least for the foreseeable future, as he has numerous other projects he wants to complete as well. As such, he wants 5 to tie up all the loose plot threads from prior games and start several new ones for future sequels helmed by other directors to follow.

@Erian1Mortal
You’re good. This is a free for all information hud for everyone to use.


Erian1Mortal said:
Dante and Vergils name being based of Italian people
Click to expand...

There's a little more to it than that. Dante and Vergil both have a direct correlation to people who traveled to hell and back. Dante went to hell and Virgil wrote the Aeneid, the story of Aeneas who journeyed to the underworld, it's why Dante chose him as his guide in his epic poem. Well, that and he was an admirer, I think. Nero's name is also very likely symbolic of his role in burning down Rome.
I've never heard the name Vitale before but if this is the case then it will likely also be symbolic of his role or history.

Anway, I couldn't get this in any higher of definition but you can all make out what they say. I just finished watching Kingsmen: The Golden Circle and I have to wonder if someone's been watching that movie. Not only is there a robot arm but it's got the same function.
Last edited: Jul 8, 2018

Dunno i this been posted earlier but this is suppoused new DMC 5 image:

I don't know if there's anything new but I do know that it says there is a reason for Dante to look so wild. At the current San-Diego Comic Con 2018 company Asmus Toys, which announced a series of premium figures in the format 1/6 (and which, incidentally, has already released Dante in the fourth part), brought to the exhibition slightly updated Virgil and (!) The prototype of a young Dante .
http://news.toyark.com/2018/07/19/s...gs-devil-may-cry-pulp-fiction-and-more-309360

Do rumors count as news and info?


>There are three scenarios, one for each character with ten missions each. You can play them in any order, but Nero's is the first chronologically. Once you complete them all, you'll unlock the endgame scenario in which you play as all three in different missions.

>Vergil isn't playable in the base game, but Nero does get to use Yamato later on. Vergil will probably get a DLC expansion similar to what was done in DmC.

>"V" gives a different answer for his name each time he's asked what it stands for. He's a much more "vulnerable" character than the rest of the cast. He was an orphan adopted by Nico's family, and at a young age he discovered that he had a spiritual connection with the demon world. His tattoos are identical to Nico's as a symbol of appreciation for her raising him.

>"V" uses a magic staff or baton to summon monsters, and his different "weapons" are different classes of monsters such as demons, ghosts and angels that he recruits after defeating them in a boss fight.

>The way each character saves and upgrades is different. Dante and "V" will encounter classic DMC statues, while Nero finds hot spots where he can contact Nico.

>A training room similar to the one from DmC will be included.

>If you hate Devil Trigger, then don't worry because Dante's battle theme is the typical Shootie HG fare. "V" has an orchestra rock styled theme.

>Here's the way dynamic music works. When you begin a battle, the song is an instrumental, and the lyrics will kick in once you raise your style ranking, followed by the chorus when you raise it even higher. At the higher rankings, the bass and instrumentation will be enhanced, at at SSS you can hear new parts of the song that aren't present normally, such as a solo or extra vocalizations. For example, the synth riff you hear in the full version of Devil Trigger.

@Stylish Nero
Well, yeah, since it’s spamming or trolling I see no reason to exclude them. Before the announcement there were a LOT of rumors and most, with some significant exemptions, turned out to be true. Besides, from where we stand rumors are all we’ve got. We still have a month to go before Gamescom.


Also, the guy kept posting after that.


>Vergil was indeed part of the scrapped "season 2" for Marvel vs Capcom Infinite. He was the only Capcom character to reach a complete playable state, since most of his animations and assets could be reused from the previous game. Last I saw he still had placeholder sounds from UMVC3. He did have a unique animation for his level 3 super if Dante was his partner, similar to Winter Soldier with Captain America. If you've played DMC3, you can already guess what it looked like.

>Similar to how Capcom re-released Ultra Street Fighter IV to promote Street Fighter V, expect a physical re-release of DMC4 Special Edition to be announced for Playstation 4, Xbox One and Nintendo Switch, marking the series debut on Nintendo platforms.

>On that note, I can verify that the supposed "leak" of Dante in Smash is true. I'm not really a Smash/Nintendo guy, but I've seen the trailer. I can try and break down what I noticed if you guys want, I think DMC fans will be very happy with how he's represented.

>On the other hand, I have no knowledge of Dante making any kind of appearance in Bayonetta 3 as a bonus boss or cameo like people seem to be suggesting. I'm not sure where this speculation came from but if it's happening then Reuben hasn't been contacted to reprise his role.

Certain things are solid alright, but there are some questionable things like:
- In the 4chan threat, Op goes on how he saw V's face, but he only says that V has a sad expression, he is younger than he seems, but the guy never describes V's facial features, the color of his eyes...
_ OP describes V's tatoos as identical to Nico's, but they couldn't be more different. (unless he is talking about some hidden tatoo.)

We have to wait for some more specific information.

The Gamescom 2018 at Capcom this year is all about the sons of Sparda! For this year's Gamescom we offer you a world premiere :
For the first time, you as a visitor to the gaming fair will be able to play the action spectacle Devil May Cry 5, which will be released in the spring of 2019 . Play stations for you will be on the Xbox booth in Hall 8 of the Koelnmesse. In this first playable version of Devil May Cry 5 , you'll be on the streets of Red Grave City with Nero, setting you up for some demons and creatures of the underworld.

In addition, director Hideaki Itsuno visits Gamescom and will sign autographs. You will learn more about this shortly. Devil May Cry 5 will be released for the Xbox One family, the PlayStation®4 computer entertainment system and Windows PCs.

However, Resident Evil fans will not have to go their own ways: the Xbox booth will also feature select play stations where you can throw a very first, exclusive and limited look at the recently announced reinterpretation of our iconic survival horror classic Resident Evil 2 , Thus, the title is publicly playable for the first time in Europe; however, a minimum age of 18 years is required due to age rating restrictions. Extensive possibilities to play Resident Evil 2 are offered as part of the EGX Berlin . More information will be available in the next weeks!

That means DMC5 might not be behind closed doors like DmC was back in the day, wich in turn mean less waiting in line!
But that also means I'll have to make do with a Xbone controller (wich I'm not that fond of) but I'll make do. Only a couple of weeks left! 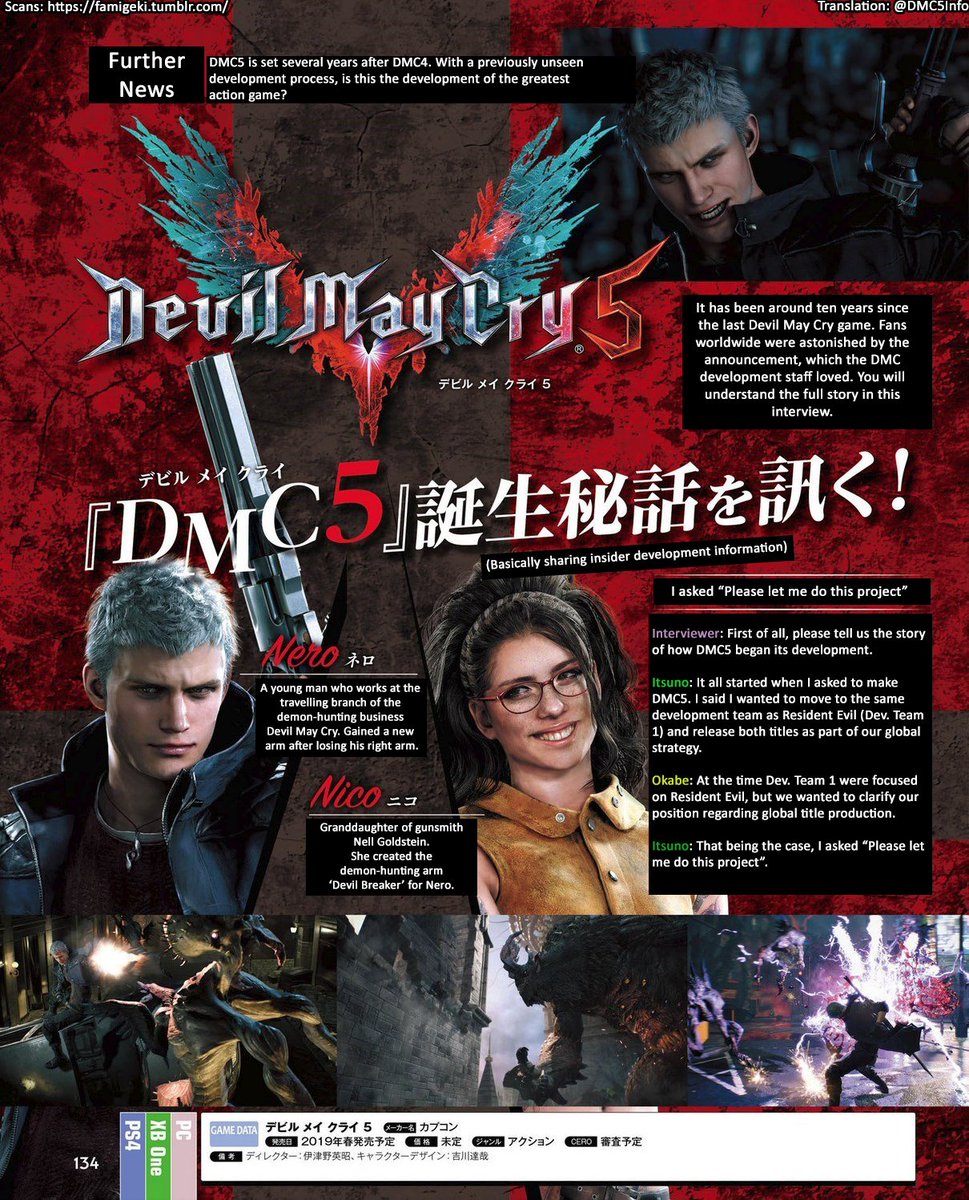 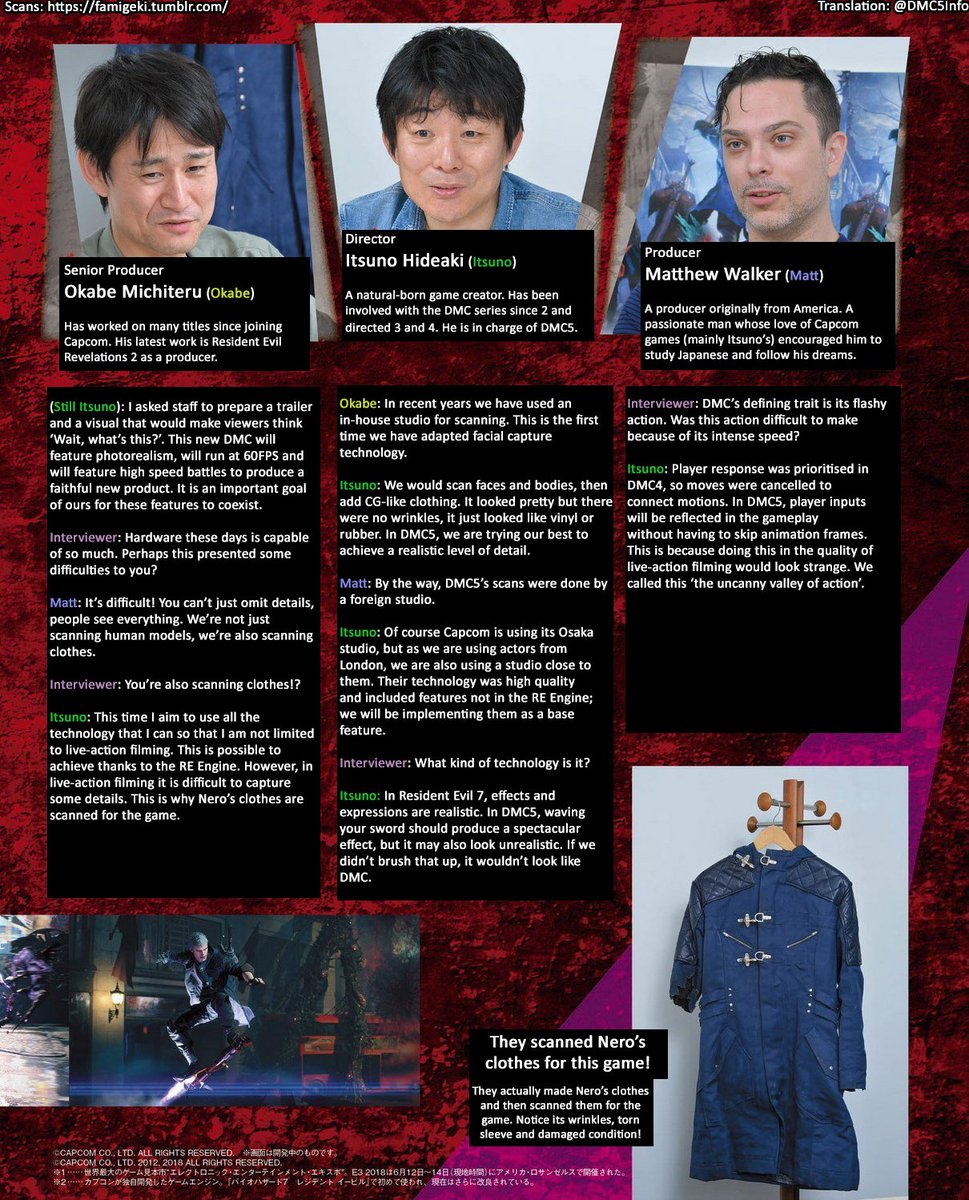 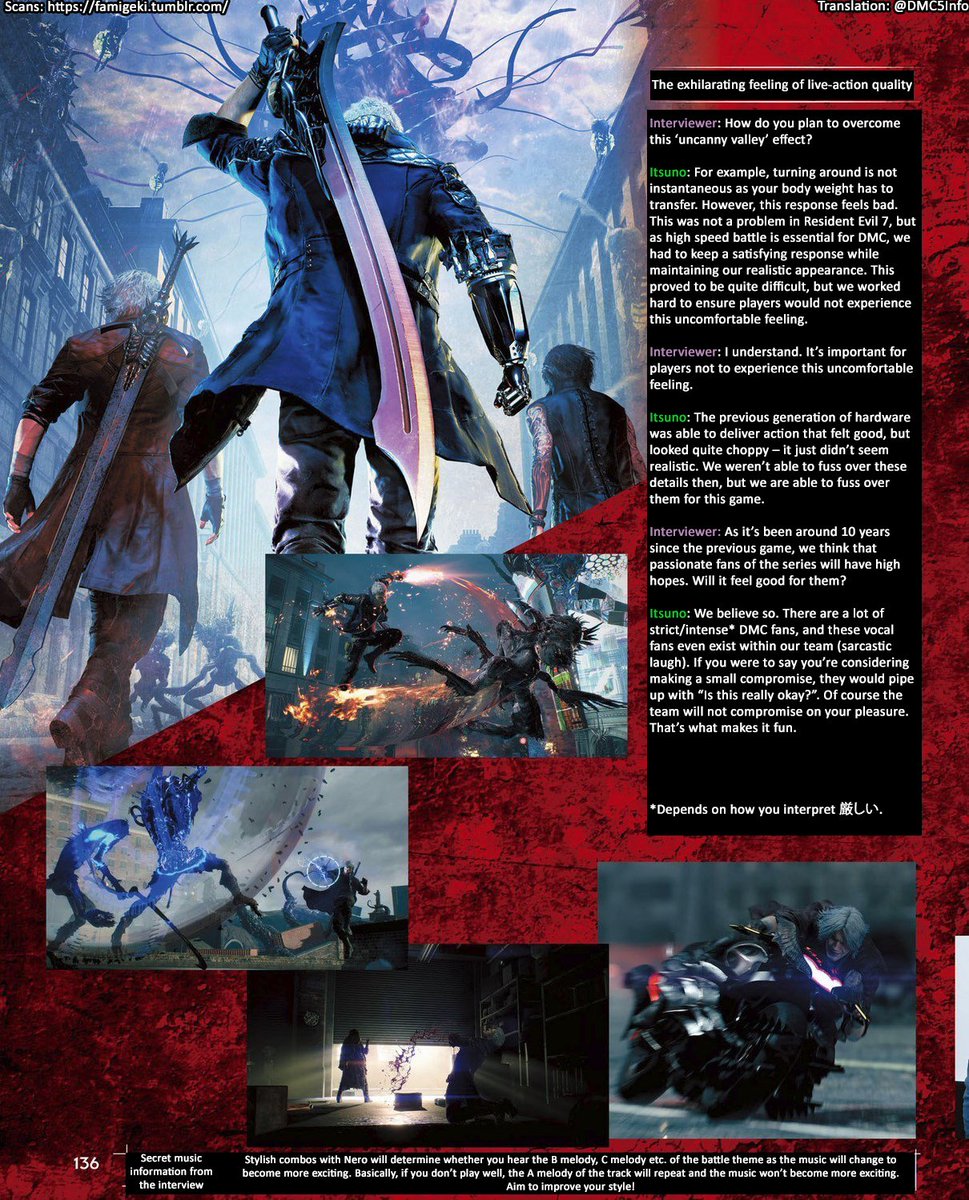 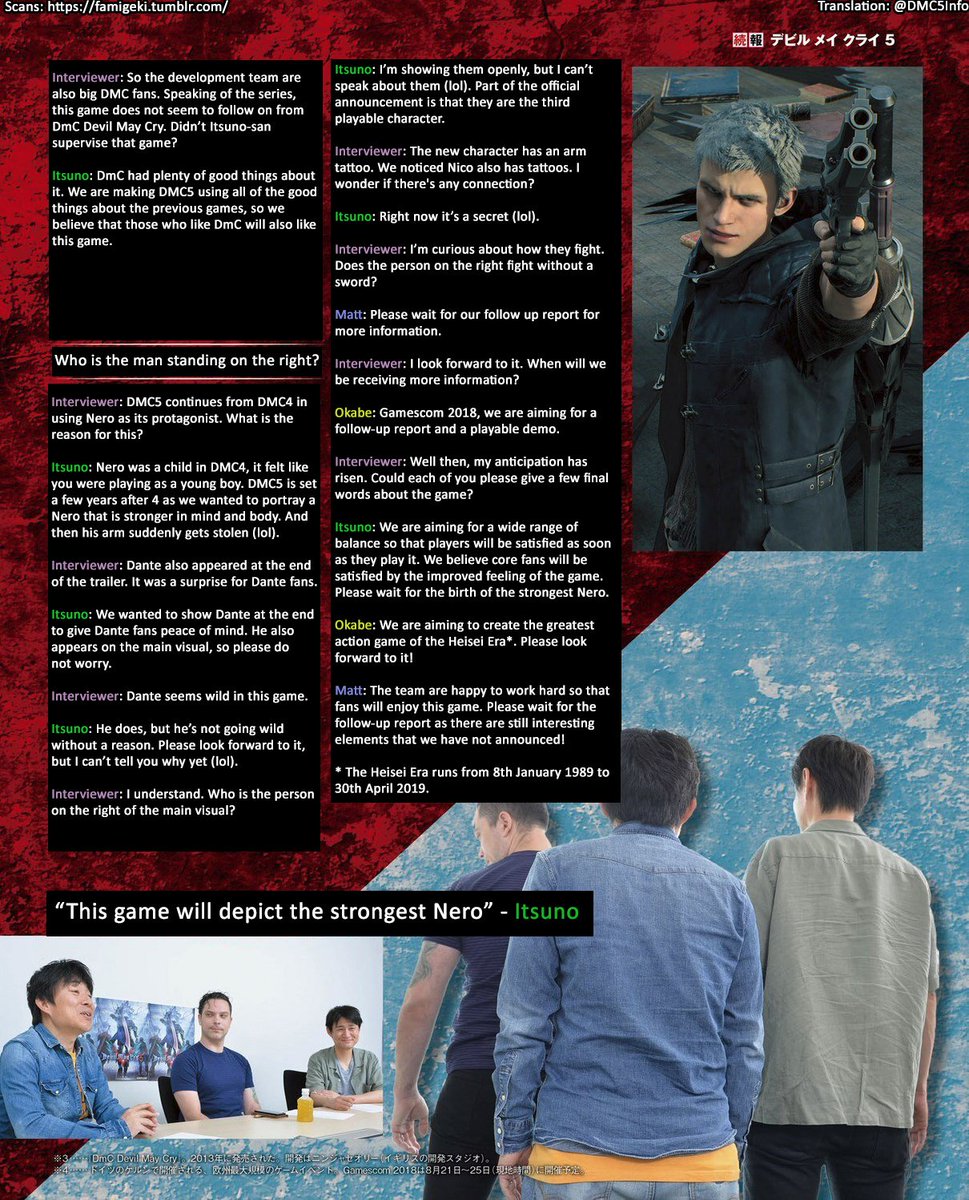 https://www.resetera.com/threads/ne...-itsuno-and-producers-okabe-and-walker.57784/
was this posted already?

Erian1Mortal said:
https://www.resetera.com/threads/ne...-itsuno-and-producers-okabe-and-walker.57784/
was this posted already?
Click to expand... 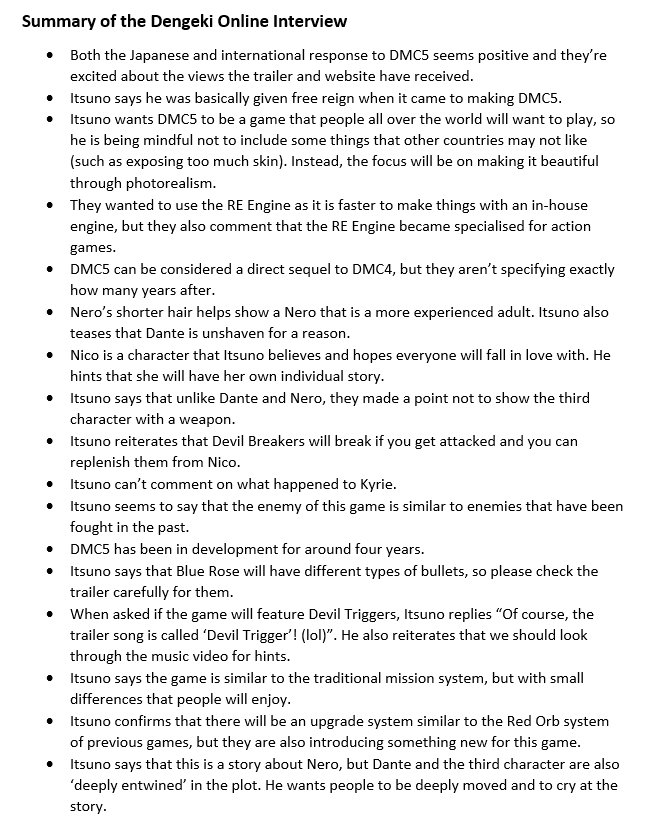 Innsmouth said:
beat me to it. I saw this:

Has anyone watched the Devil Trigger music video? I saw it a few weeks back but never think nothing of it. Then it says here Itsuno said we should look for "hints" in the music video so I dont know what to look for.

Now I get it why the comments are disabled.