Ok. So I've been told that people have a hard time navigating through the general info thread because all the actual official info is buried amongst all the other posts. So We're going back to how we had it in the DMC4 section. One thread for news, interviews, new images, videos, and general new stuff from the game, and another for general discussion.

The rules are simple, this is where people can go to see or post whatever new releases of the game people here find so only post new or varying media from the game, be it images, videos, news, interviews, info and whatever other data you find. Don't post personal opinions, thoughts, or impressions on the stuff you see here, but if you have something to add, a correction or other tidbits regarding the stuff in here feel free to post it. This is not a police state. If I think your post doesn't belong I'll just move it to general discussion.

Anyway, I'll start moving all the posts from the other thread here and change that one to general discussion.

Hmm. We're going to need a media and news release thread for stuff like this to go in. For this batch of info this should be fine.

The time has come! Get ready for the craziest, most stylish action game experience yet:


Time to Kick Some Demon Ass

Years have passed since the events of Devil May Cry 4, and a lot has happened. Young demon hunter Nero has lost his Devil Bringer demon arm… but hey! He’s now heading his own branch of the demon-hunting business Devil May Cry. To make up for that lost arm, and keep his style rankings up, he’s enlisted the help of expert craftswoman Nico, a brand new character in the series, to lend a hand and build different types of prosthetic arms that unlock new badass combat abilities and devastating powers.

A new demonic invasion has begun with the seeds of a demon tree being sown in Red Grave City. Now fully equipped with his trusty Red Queen and Blue Rose, and a new arsenal of rad robot hands thanks to his partner Nico, Nero must rise up to this new impossible task. With such insane amount of energy and destruction emanating from this surprise invasion, the stage is now set for the latest chapter of the “Sons of Sparda” saga. 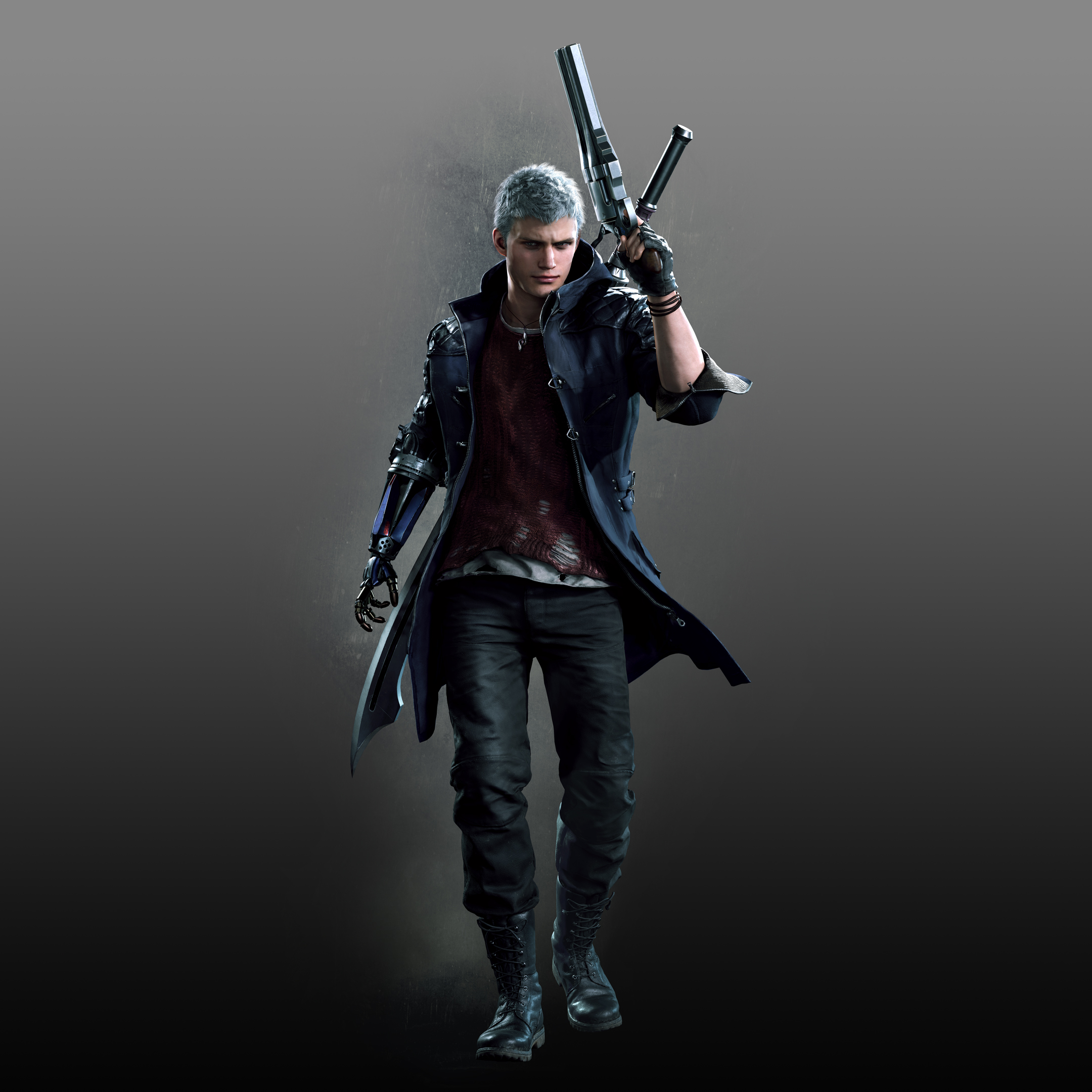 However, Nero is not alone in this fight. Our gameplay announcement trailer above focuses on Nero and his new set of tricks, but Devil May Cry 5 will feature 3 playable characters, with their own unique over-the-top playstyles and flair. 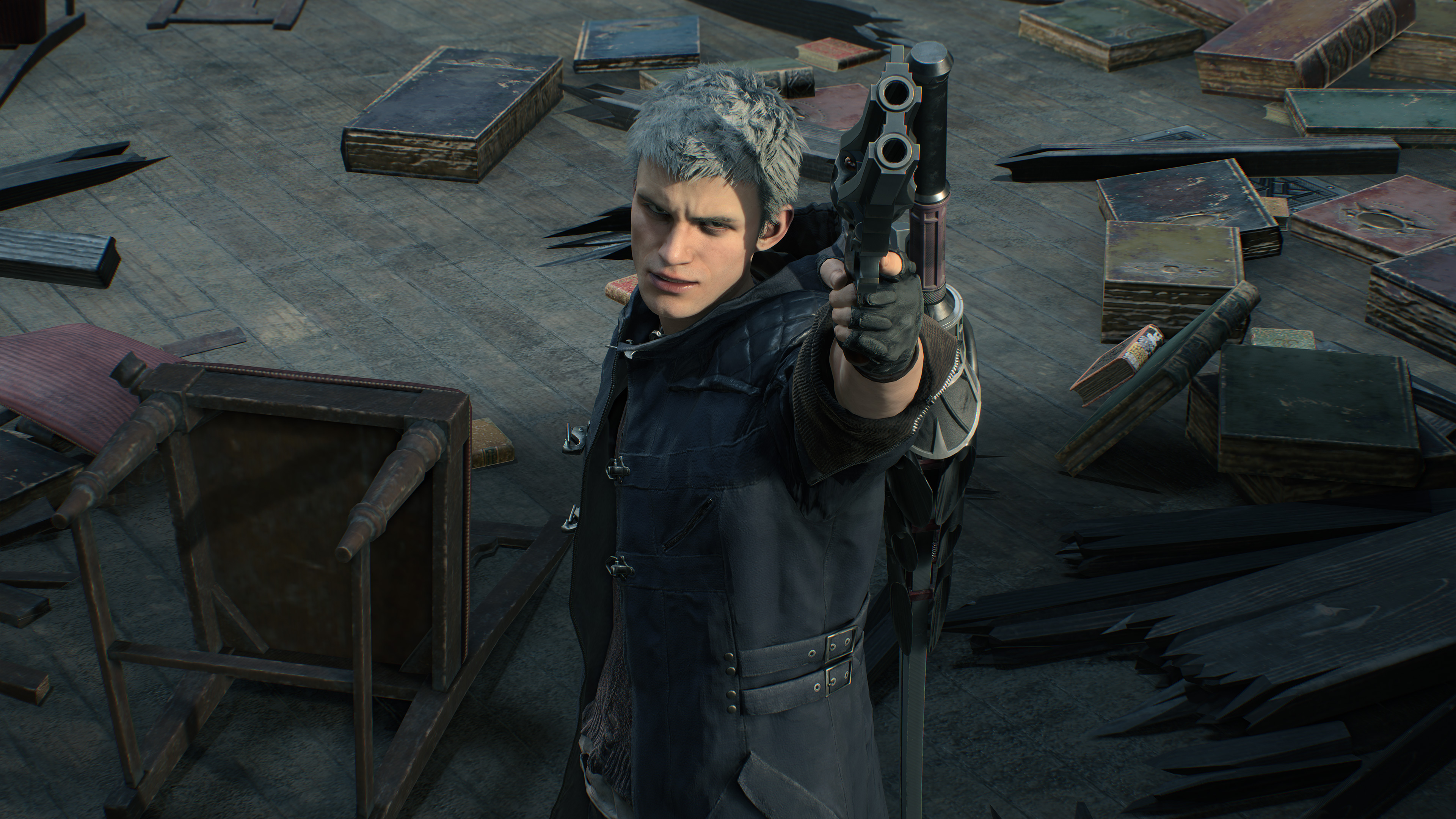 More details on characters and specific gameplay moves are still forthcoming—can Nero still MAX-Act rev the Red Queen?!—but rest assured the complete package will be delivered to you in true Devil May Cry form at a silky-smooth 60 frames-per-second and stunning visual fidelity, thanks to the power of our proprietary RE Engine. I don't want to make a thread for every little thing I find so I'll just make this temporary thread for that kinda thing.

Now, how about some gameplay and info.
2 hours 10 minutes 10 seconds in.

Hey I got you.

Innsmouth said:
is this his daughter :O Probably a stretch though
Click to expand...

Did you read the novel? The gunsmith in the original novel was an older woman named Nell and according to that she made Ebony and Ivory. Used to be Tony Redgrave who made them but after it was her. Nico is her granddaughter.

So, what I said about that old black guy being Morrison on that other thread? Turns out I was right.

Itsuno held a fan event and he confirmed it there. I don't know what else they talked about, yet. Foxtrot94 said:
What's the source for that? I've heard no one talking about what they showed in that behind closed doors panel.
Click to expand...

I found it in 4chan and this is the only other place I've found anything regarding it happening.
https://www.reddit.com/r/DevilMayCry/comments/8q5xwl

Here is a stream replay where, around the 3h 53m mark, Itsuno and a couple of other devs are interviewed about DMC5.

For those who can't or don't wanna watch it, here are the info that got disclosed from it.

- The black guy smoking a cigar at the beginning of the trailer is indeed Morrison from the anime... somehow.

- They can't say who the red demon with multiple blue eyeballs (I'm guessing they're eyeballs) from the beginning of the trailer is yet, but he's definitely gonna be an enemy in the game and he's gonna be a pretty big guy, more than 20 ft tall.

- The Devil May Cry neon sign that Nero put on his van was given to him by Dante like in the DMC4 novel.

- The van is actually also Nero's office and it has a fully rendered reception area inside it.

- They made sure to bring back as many of the developers that worked on DMC3 and 4 as possible for this one, and Yuji Shimomura is once again the director and choreographer for the fight cutscenes.

- Nero's Devil Breakers will deteriorate with usage and he carries a number of them with him to quickly re-equip them after they break. It's not clear if this is a gameplay thing as well (I hope not) or just a story/lore detail.

- You can indeed use a variety of Devil Breakers, each with their own unique capabilities, more details about that at Gamescom.

- Nero's jacket is an actual real life one they got made in Europe and then photoscanned to port it into the game's engine.

- The music video for the "Devil Trigger" song contains little hints about the third playable character.

So they even have a prototype for the game case


Foxtrot94 said:
- The black guy smoking a cigar at the beginning of the trailer is indeed Morrison from the anime... somehow.
Click to expand...

But seriously. Seen how the producer what a gringo I get the impression they did that on for the progressiveness of it. I’ve mentioned before my feelings about changing an established character’s race. With that being said I kinda like the idea of Morrison being a black guy. It gives him more personality, makes him a little more interesting. He wasn’t particularly captivating before, or at all, but with his few lines of dialogue he’s already shown more character than his entirety in the anime.


Foxtrot94 said:
- The Devil May Cry neon sign that Nero put on his van was given to him by Dante like in the DMC4 novel.
Click to expand...

Yeah, I remember reading that but... It’s kinda crappy, though. I thought he send him a smaller version of the one from his office. That one is kinda underwhelming.


Foxtrot94 said:
- The van is actually also Nero's office and it has a fully rendered reception area inside it.
Click to expand...

Ok, good. So he's not making poor Kyrie live there. I'll she still cleans a up after him, though.


Foxtrot94 said:
- They made sure to bring back as many of the developers that worked on DMC3 and 4 as possible for this one, and Yuji Shimomura is once again the director and choreographer for the fight cutscenes.
Click to expand...

Considering Shimomura just made a comeback with RE:BORN I expected to see that. Plus, with everyone else they brought back someone as key as him would probably be an obvious addition.
For those of you who don't know about Shimomura's last film this is the kind of action he's made lately and I wouldn't be angry to see something like it in the game:
That's Tak Sakaguchi, who started on another film where Shimomura was action director called Versus. It was the film he made before he started working on DMC3 and if you liked the action of DMC3 you should definitely give Versus a viewing.


Foxtrot94 said:
- Nero's Devil Breakers will deteriorate with usage and he carries a number of them with him to quickly re-equip them after they break. It's not clear if this is a gameplay thing as well (I hope not) or just a story/lore detail.

- You can indeed use a variety of Devil Breakers, each with their own unique capabilities, more details about that at Gamescom.
Click to expand...

So, it's possible that they're going to have a single weapon for Nero but with lot's of functions for his arm. I don't know how I feel about that.

My question is, can you run out of arms and be left with just your gun and sword?

But it's so cringy.

Alright, in all fairness, the song is not that bad, it's just that whole section where they actually say Devil Trigger.

So, supposedly this is the new face of Dante:
http://instagr.am/p/Bj3My3cHAb1/
And this is the first pic when I googled his name:

To clarify, this is supposed to be the new facial capture actor for Dante. It's his likeness they're supposedly using, though I don't see it from that pic. The nose looks too wide. 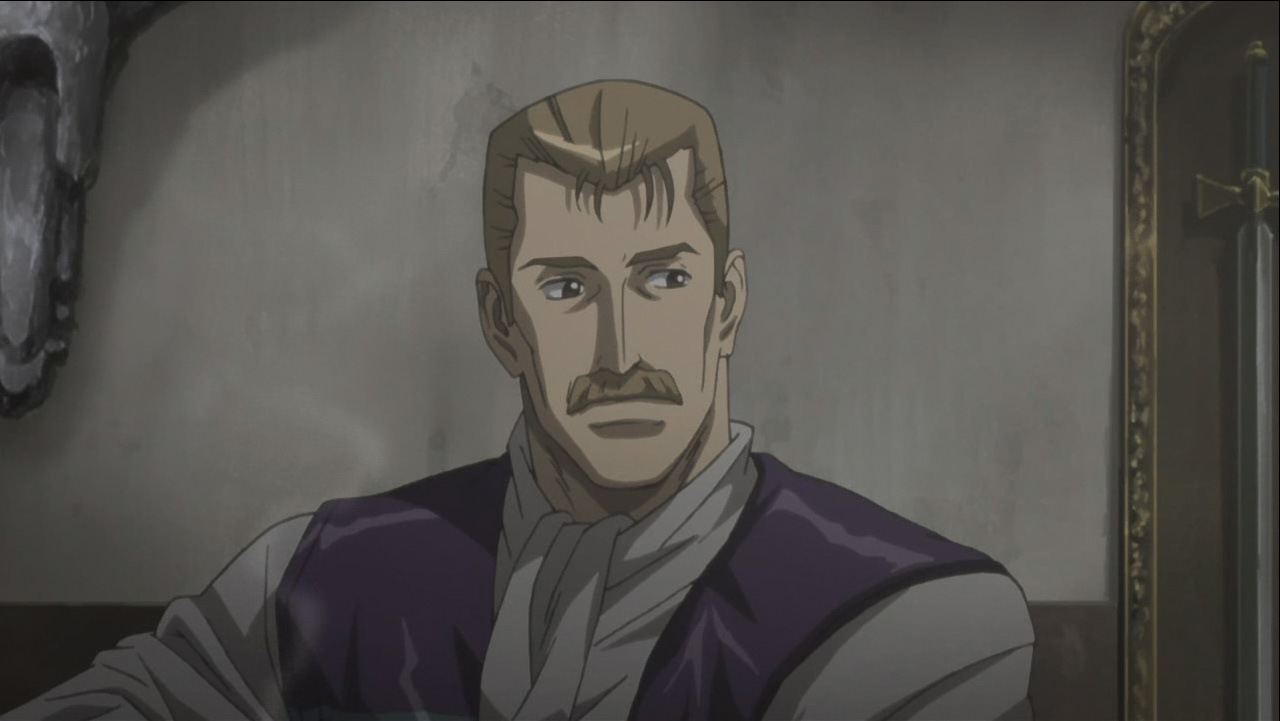 No other in the entire franchise.

Did anyone post this already?
I'm not all that knowledgable in japanese, so can anyone translate?

In case anyone needs it with transparency. And a MUCH larger version of the logo for those who need it: It looks like Nico's full first name is Nicoletta.

Foxtrot94 said:
What video though? Cause out there it's full of people so convinced of their speculations about this game to pass them off as facts.
Click to expand...

Dunno if this been posted but for you all guys on Forum , from JP gaming magazine scans i found on net an whole article on DMC 5: 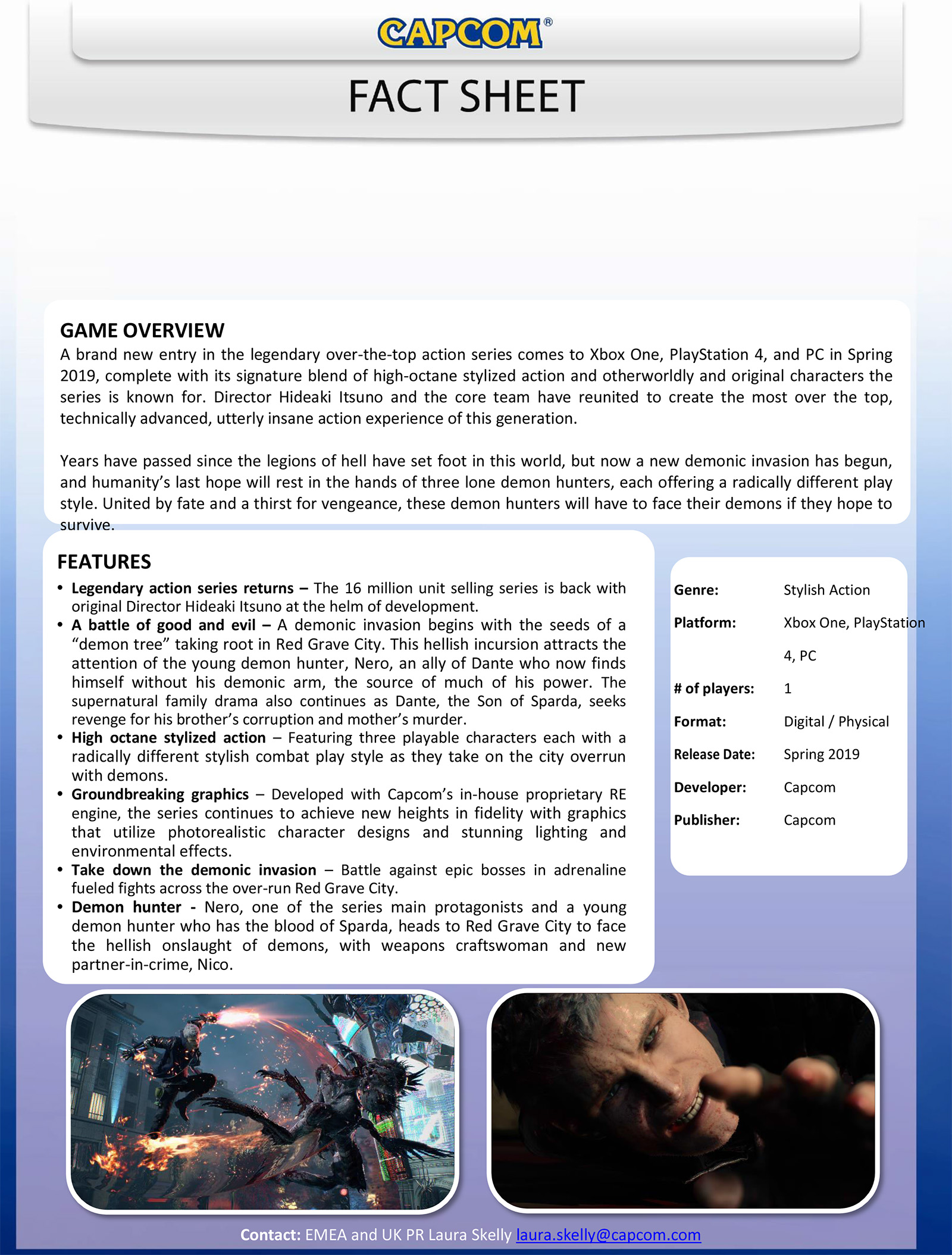