Let's talk about the Tokusatsu genre

Power Rangers Beast Morphers is on full display at this year's Licensing Expo, which finally unveiled the suits to the general public and unveiled the first trailer for the series.

Set in the future, a secret agency combines a newly discovered substance called "Morph-X" with animal DNA to create the Power Rangers Beast Morphers. The Rangers must fight off an evil sentient computer virus bent on taking over the source of all Ranger power, the Morphin Grid itself. Featuring never-before-seen leather suits and an all-new beast-themed arsenal (including dynamic new Zords), fans should get ready for a season full of secret ops and morphinominal fun.

Power Rangers Beast Morphers will premiere in spring 2019 on Nickelodeon, and the first season under Hasbro after they acquired the Power Rangers franchise.

The latest issue of Televi-kun magazine has surfaced online, revealing that the mysterious Lupin X/Patren X will make his debut in Kaitou Sentai Lupinranger vs. Keisatsu Sentai Patranger this June!

Lupin X and Patren X is a single person, it's just that he has the ability to transform into both thanks to the X Changer. This item is composed of the X Train Gold and the X Train Silver. It can go from one mode to the other by just rotating the cannon. He is also equipped with the X Rod Sword, which has two modes: sword and jitte modes.

But the bigger question is, whose side is he on? As it turns out, he is not allied to any team! He's not part of the Gangler nor part of the Lupinrangers or the Patrangers! He'll just support the team that he feels like he wants to support. Take note, the scan features Lupin X/Patren X attacking LupinRed and Patren #1.

Lupin X/Patren X also has a mission, it seems that both the phantom thieves and the Global Police have secrets, and it is his job to uncover it. Lastly, his secret identity still remains a mystery. Who is the man behind the masks?

Who cares about the Beast Morphers Rangers when I want to know who will play US Enter and Escape! That is the question on everyones mind and if it isn't then why isn't any one asking them about it?

Some early details have been learned about Kamen Rider Zi-O, the show that debuts after Kamen Rider Build.

Japanese toy provider Chappy has put up listings for a few Gashapon offerings which are specifically titled “The show after Kamen Rider Build“.

There are no photos or details about what these items could be, but the listings include Big Size Air Weapon, Interlocking Item 01 and 02, and Digital Watch.

The term “Interlocking Item” has also been used for those aforementioned series in reference to their transformation items, the Fullbottles and Rider Gashats, which means that the next series may focus on transformation items that are inserted into a transformation belt rather than use scannable item like cards or medals.

All of these listings have a release date of late September, giving a vague idea of when the next show will debut. Kamen Rider Build debuted on September 3rd, with GP Fullbottle 01 releasing in late September, which means it’ll likely conclude at the end of August or the start of September.

According to the listings, more information on the Gashapon listings – which likely includes the series itself – will be revealed in mid July. Information on Kamen Rider Build was similarly made available at the same time last year.

That name reminds me of ZX and ZO two Riders who did not leave much of a impression on me if I am to be honest. But I can't help but wonder what the new gimmick will be. Wouldn't be a hoot if were chains or something hence the interlocking?

So I'm marathoning every season of Power Rangers and right now I have watched Season 1 and 2 of Mighty Morphin Power Rangers; including The (90's) Movie and I am very entertained. Here are a few random thoughts:

Jason was a excellent leader and had a screen presence.

Aisha is actually very attractive. Like she is hot brah.

Kimberly has a great petite body. No surprise honestly.

Billy is a mixed bag. I want to like him but I can't seem too.

Tommy is a better character as the MM White Ranger than MM Green Ranger.

Lord Zedd is a joy to watch.

What happened to the Radbug car?

The seven Dinozords are God damn awesome and some of the best costumes and props in PR history.

The Seven Thunderzords are a mixed bag, Red Dragon, White Tiger, and Firebird are cool looking but the remaining other four are meh at best. (7th Thunderzord? Yes folks, have we forgotten Tor the Shuttlezord?)

Zedd's Zord Serpentera is so cool it hurts! Seriously best costume/prop in all of Tokusatsu history.

Bulk and Skull are cute at times.

The Movie Ninjazords are great apart but a meh when combined. 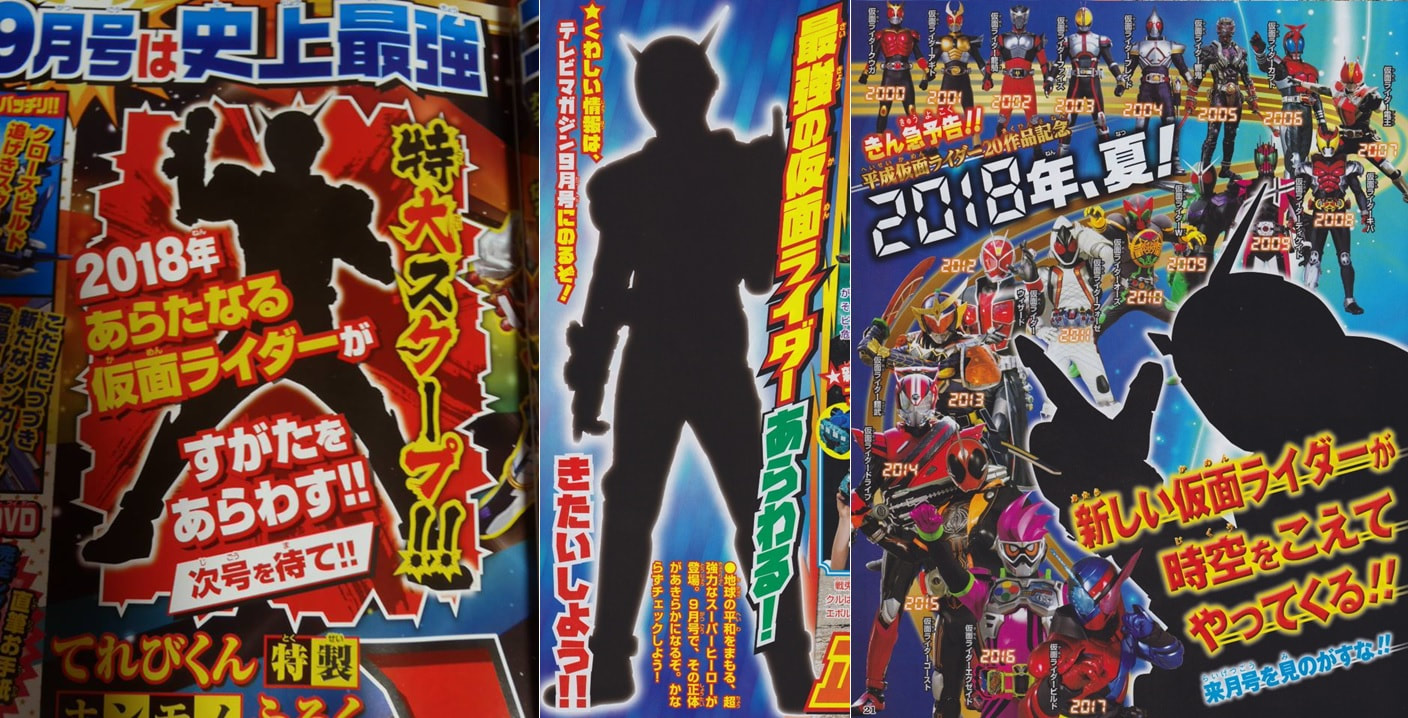 The latest issue of Televi-kun magazine has surfaced online, revealing a better silhouetted look at the next Kamen Rider, Kamen Rider Zi-O.

Not suprised if new KR ends as Decade 2.0 but well be ready for other news as this is rumour for now:

Rumors for Kamen Rider Zi-O has surfaced online, revealing that this new Rider will have a clock-based gimmick.

Take these rumors with a grain of salt.

Kamen Rider Zi-O will use 24 different clock faces to represent 24 hours needed to access the Rider's timeline to use their powers. The Kamen Riders and the hour they represent in Zi-O's clock are:

Small update, this is how in suppouse KR Zio look:

If you ever wondered what the love child of Decade, Kabuto, and Build looks like well now you have it. But no Shin, ZO, and J forms? I call bull! But here is hoping the new Rider will combine Black and Black RX's powers, because we need something like that. Oooooh a V3 and Riderman combined form and... I should stop before I dive to deep into madness. >_>

There are rumours that ZIO is first female main rider

Seen 1 episode of KR ZiO its really okay and good 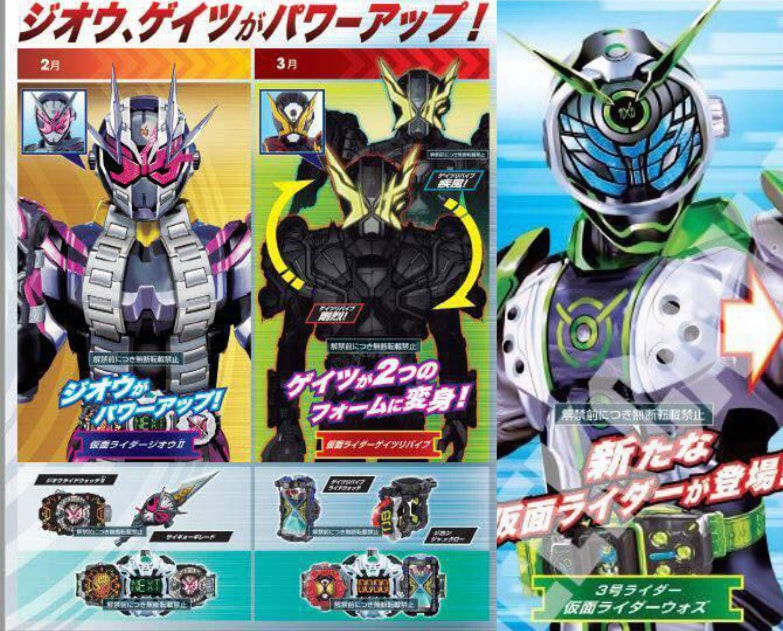 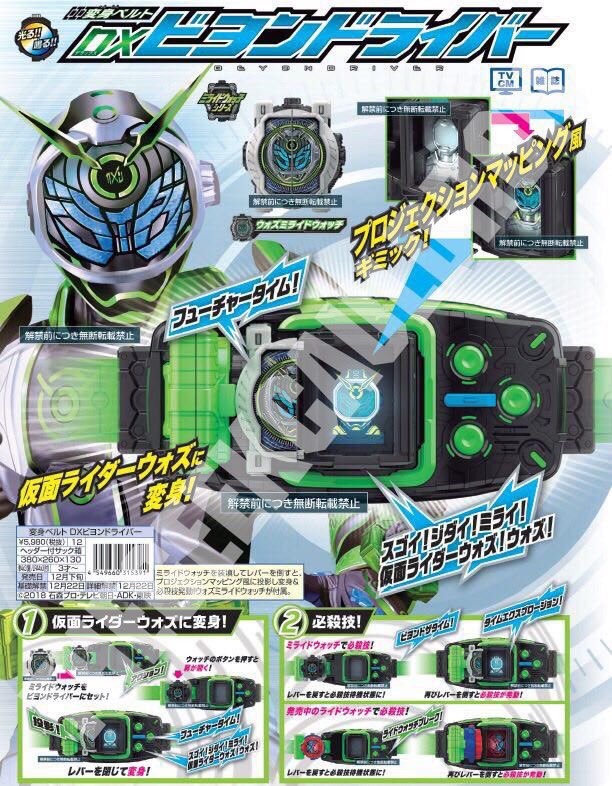 For starters, Woz transforms using the DX BeyonDriver to transform into Kamen Rider Woz! He uses the Miraide Watches to access the Future Time! His finisher is "Beyond the Time! Time Explosion!" In addition, he harness the power of Future Riders, accessing new forms!

These Future Riders and Kamen Rider Woz's forms are: 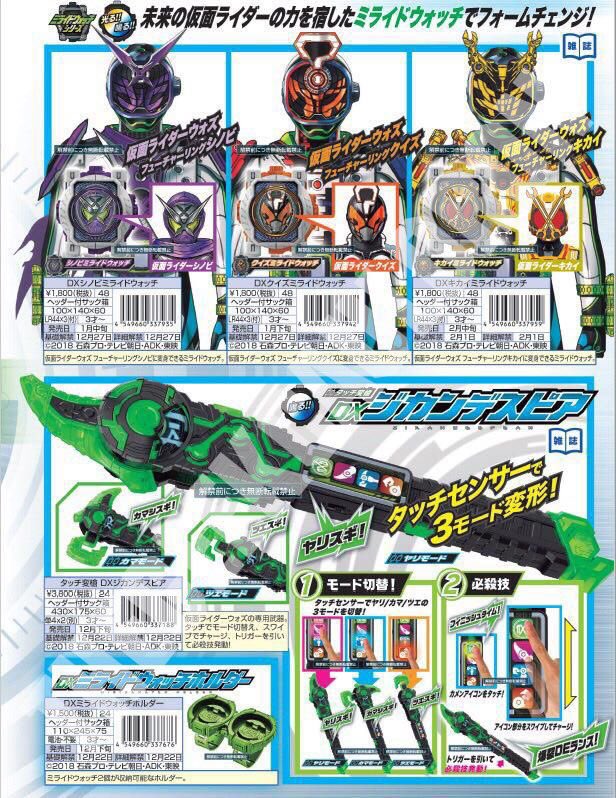 Finally, his primary weapon is the DX Zikan Despear. This item has three modes, which can be activated through a touch sensor. These modes are: Spear Mode, Sickle Mode, and Hook Mode. His finisher is the Bakuhatsu RoyoLance! 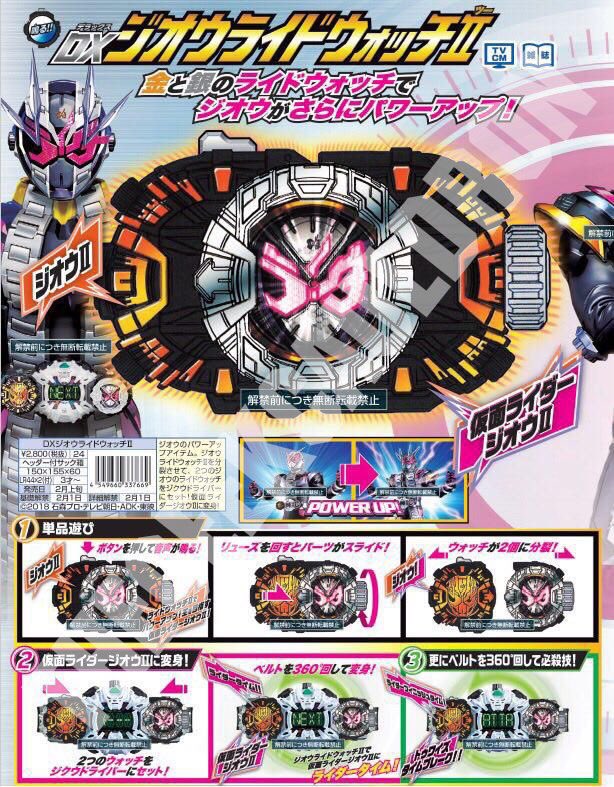 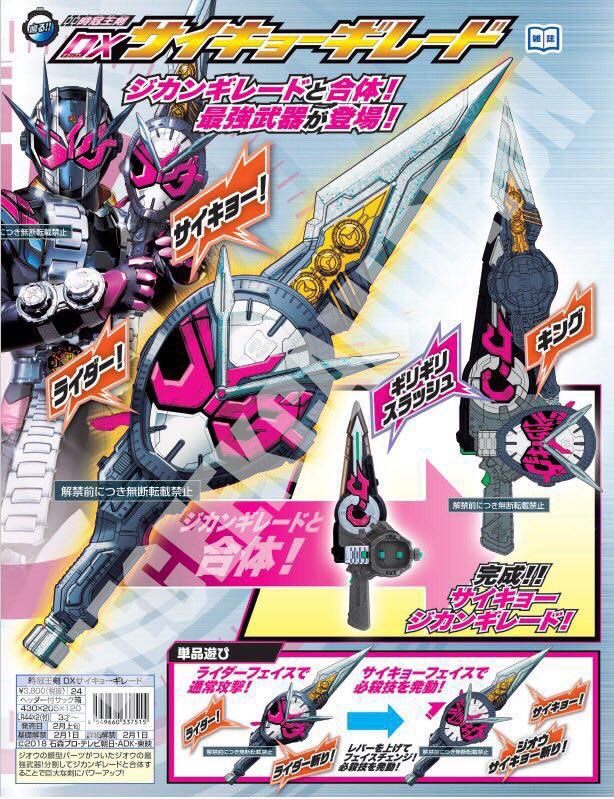 His weapon is the DX Saikyou Gilade, the ultimate version of the Gilade weapon and can combine with the DX Zikan Gilade, forming a more powerful weapon. Attaching them together changes the face of the weapon, featuring the text of the face that now says, "Zi-O Saikyou!" 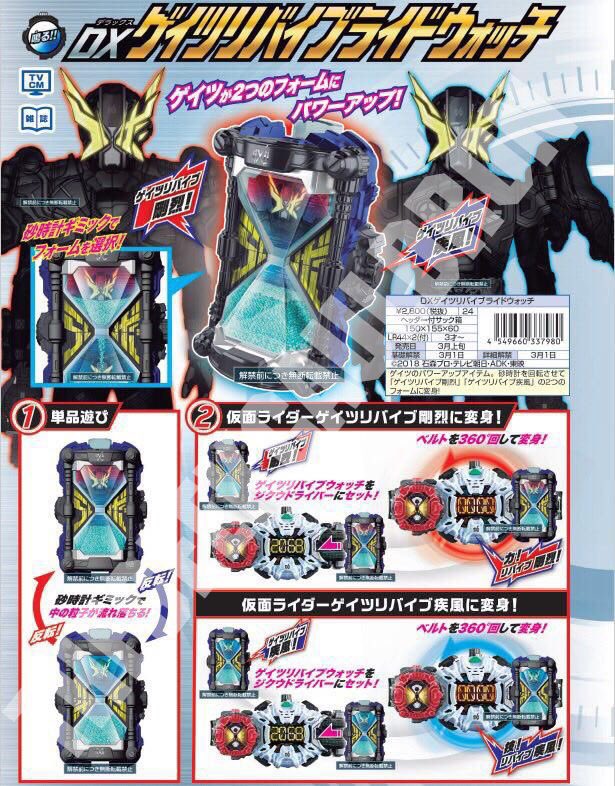 Next is Kamen Rider Geiz's next form, Kamen Rider Geiz Revive! Using the DX Geiz Revive Ride Watch and has two forms thanks to it. The fire form, Extreme Flames and the wind form, Indomitable Winds. Locking it to the Ziku Driver unleash the power of both forms. 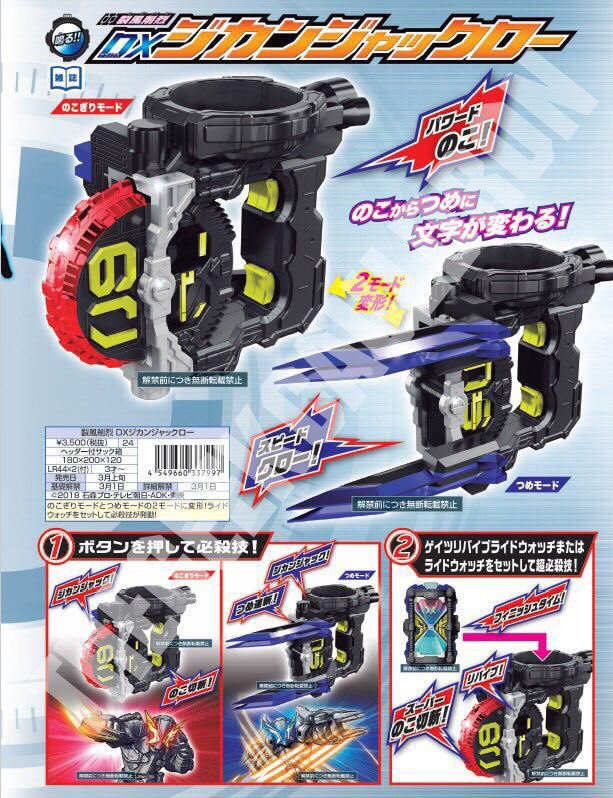 Now for his weapon, the DX Zikan Jyakuro, which has two modes: Powered Saw and Speed Claw. This weapon that is build for both power and speed-based attacks. In addition, inserting the Geiz Revive Ride Watch, activating the finisher. 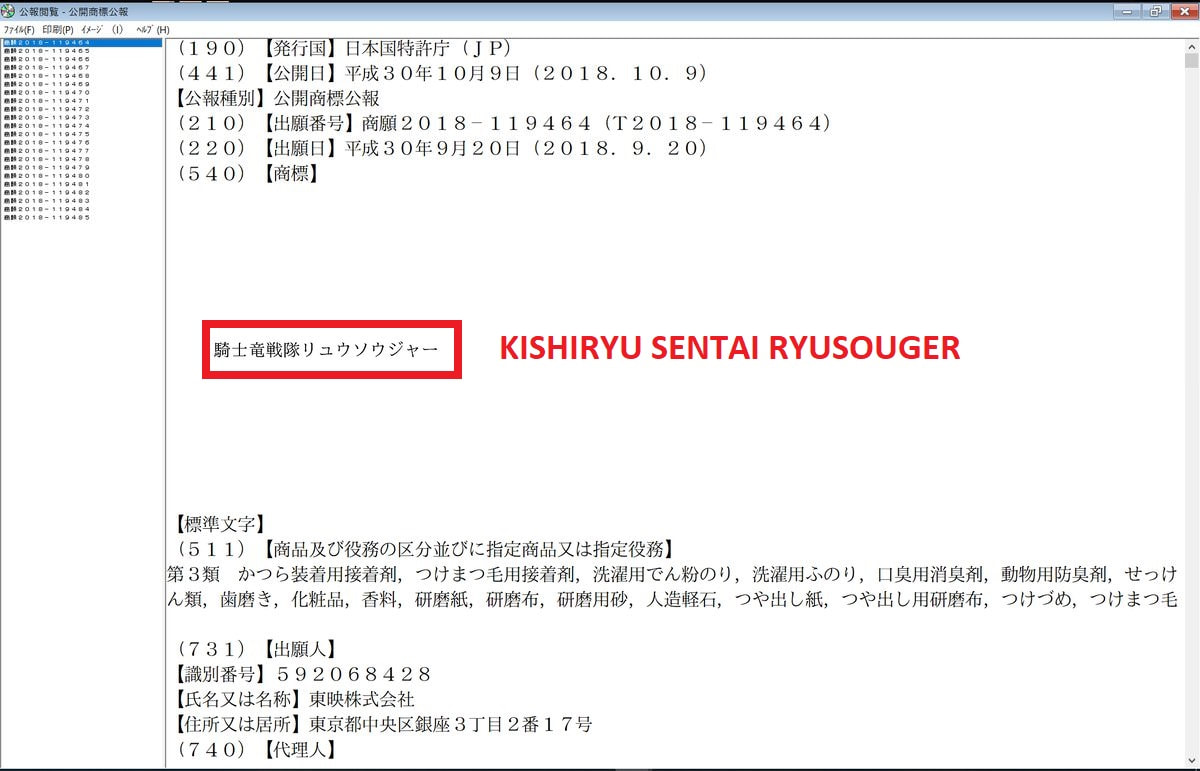 The team name, which translates as "Knight Dragon Task Force Ryuusouger," suggesting that the series will feature knights and dragons. Other details such as the show's official romanization are yet to be revealed.

@lorddemolatron I want to thank you for keeping this thread alive. You alone have shown wonderful love for the Sentai and Rider series. You miss, are awesome.

I sadly have fallen off the Sentai and Rider and here is why. I loved Kyuuranger and Lupinranger has struggled to keep my attention. It is a entertaining show but I feel the characters are to bland. Patron Red is the uptight leader, Patron Pink is stern but girlish.
Patron Green is hilarious but we get it Toei he is doomed in the love department. Lupin Red is "Marvelous Light." Lupin Yellow is the cute girl but she is only cute when wearing heels... (Oh is that just me? Meh!) And Lupin Blue is cool and oh so boring! Honestly X is the only jolly one but he can't carry the show alone.

As for Build. Oh Build you started off so freaking good then you ended. I hate the ending, such a cop-out it was. Ugh. I haven't watched Zi-oh but it the "changing into other Riders" gimmick isn't exactly fresh anymore now is it fellas? I need a Tokusatsu revival and I need it fast.

I haven't touched Power Rangers since I was 12, but I'll leave you with a couple of things.