Let's talk about the Tokusatsu genre

So my copy of Denji Sentai Megaranger came in and I must say the show is quite the tear jerker. I've forgotten how tough high school was... Also Mega Yellow and Black are the best characters because every reason imaginable.

The Lupin Rangers look so good while the Patren Rangers look blah. I do however love that Tori is thinking outside of the box with Sentai. After a season like Kyuranger you couldn't go back to typical Super Sentai. But this team vs team angle is interesting and fresh.

Getting major Drive vibes from Build's new form. Specifically Drive's form from his Summer Movie. Its name eludes me at the moment. But we can all agree lovable Sento becoming this dark badass hits you in the feels! 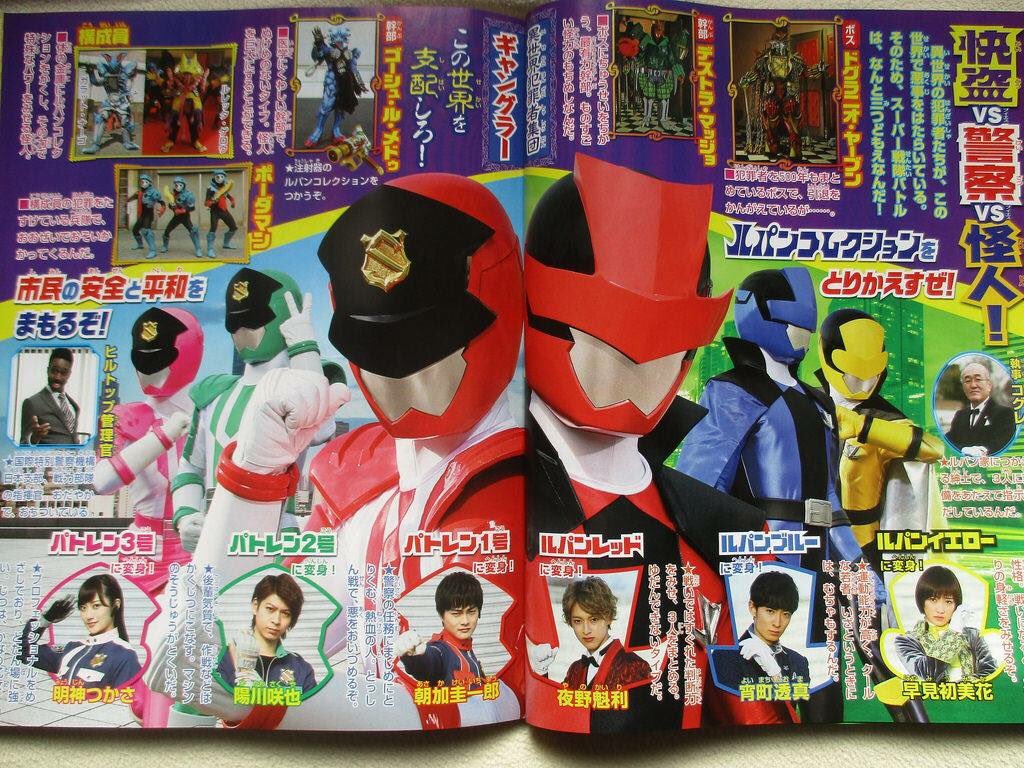 The latest issue of Televi-kun magazine has revealed more info about the upcoming 42nd Super Sentai Series, Kaitou Sentai Lupinranger vs. Keisatsu Sentai Patranger, which we learn what makes the Lupin Collection so special. 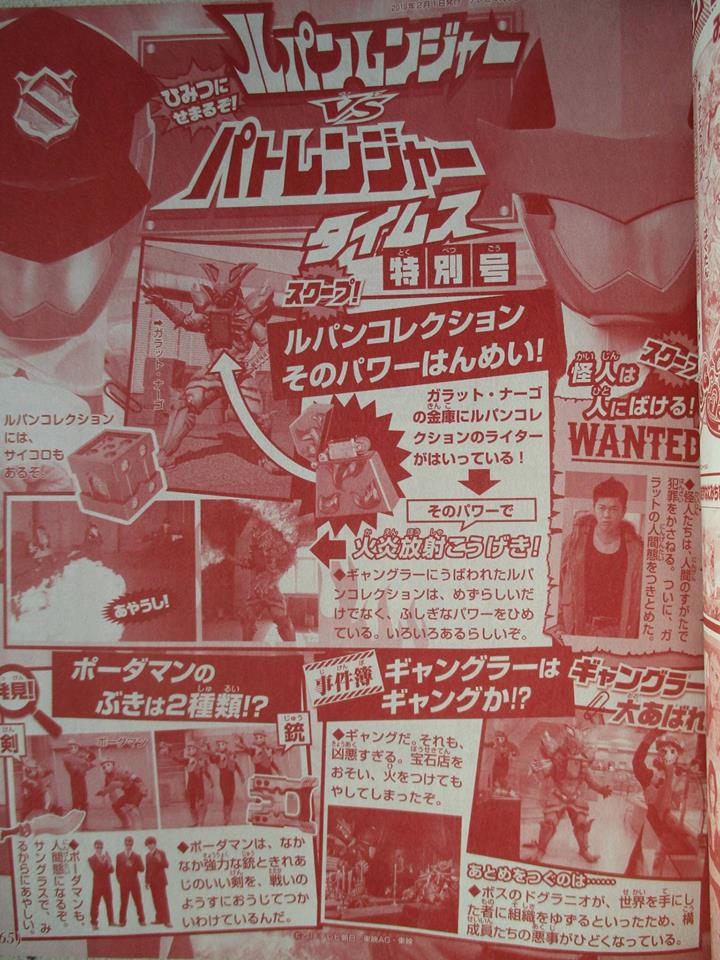 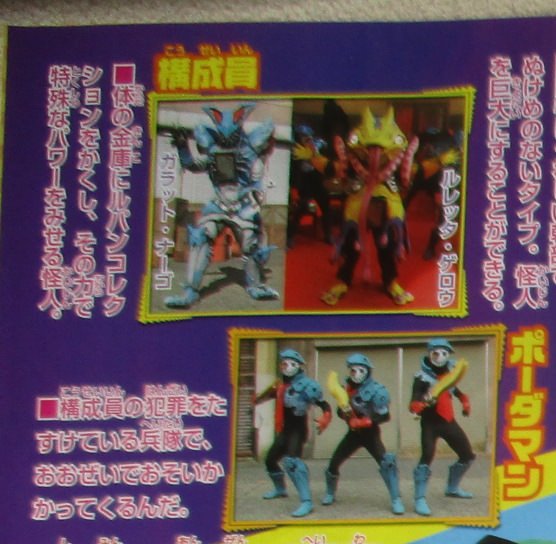 Now for some more details about the villains in the series, the Gangler. These creatures can disguise themselves as humans that the Patrangers have to investigate. In their monster forms, they have a safe in their chest. This safe harness the power of the Lupin Collection.7 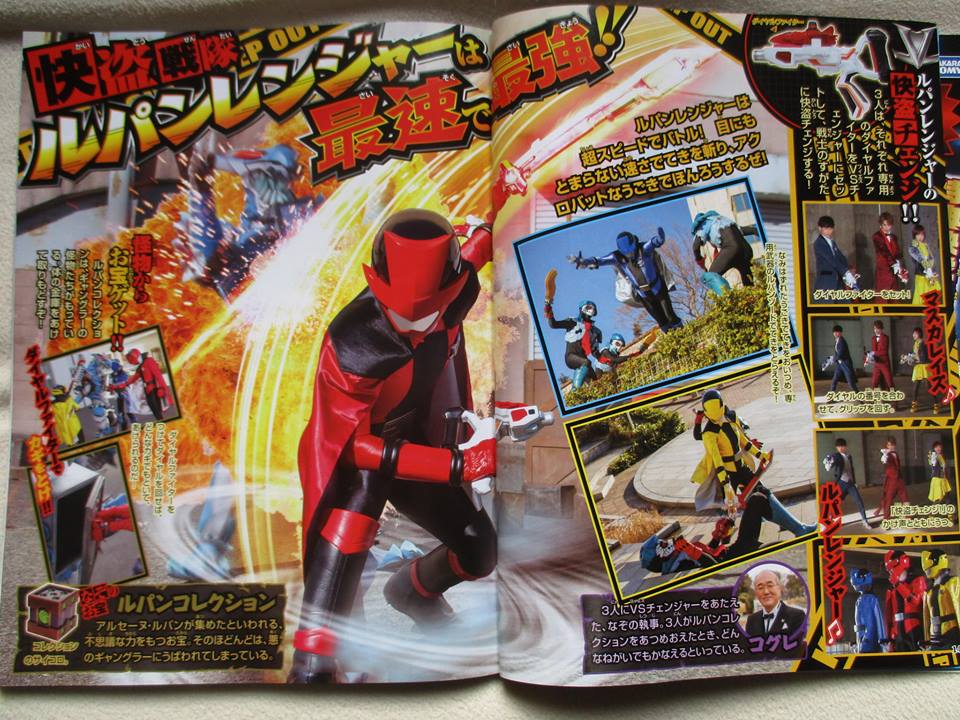 More on said collection, each Lupin Collection possess a different ability and can be used to create weapons for the Lupinrangers or the power up the monsters hence the safe found in their chests. To unlock said safes, the Lupinrangers use their Dial Fighters to unlock it. As for the first two Gangler that our heroes will face, they are Galat Nago and Ruleta Gerou. Galat was the one the Patrangers track back to their hideout. As for the foot soldiers, they are called Porderman. 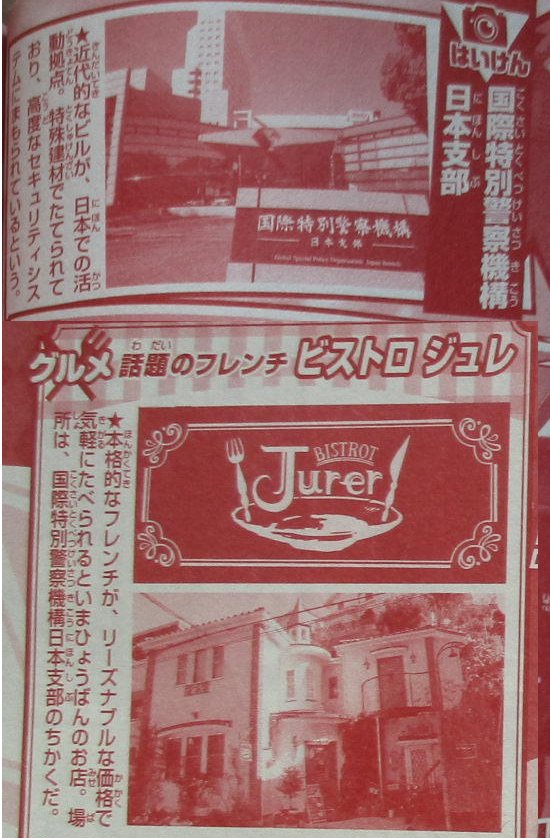 Now to some random details about our heroes and we'll start with the headquarters. The Lupinranger hideout is a cafe named Bistrot Jurer. Jurer means "promise" in French. The Patrangers of course, have their headquarters in a police station. 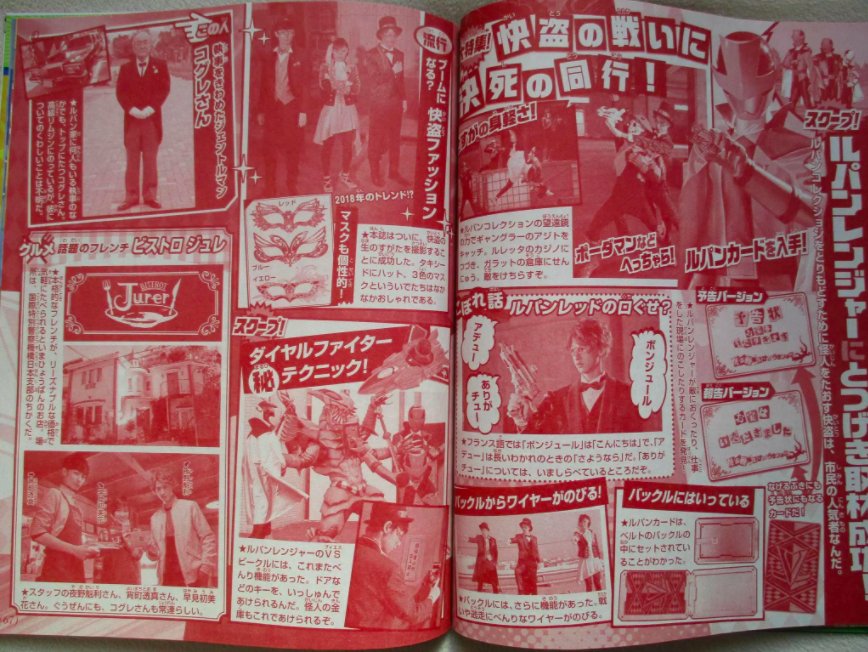 More on the Lupinrangers, LupinRed can speak random French and nicknames their sentient mecha ally, Good Striker, "Goodie". Their buckles hold their calling cards and wires within them and lastly, they wear masks to hide their identities during their escapades. 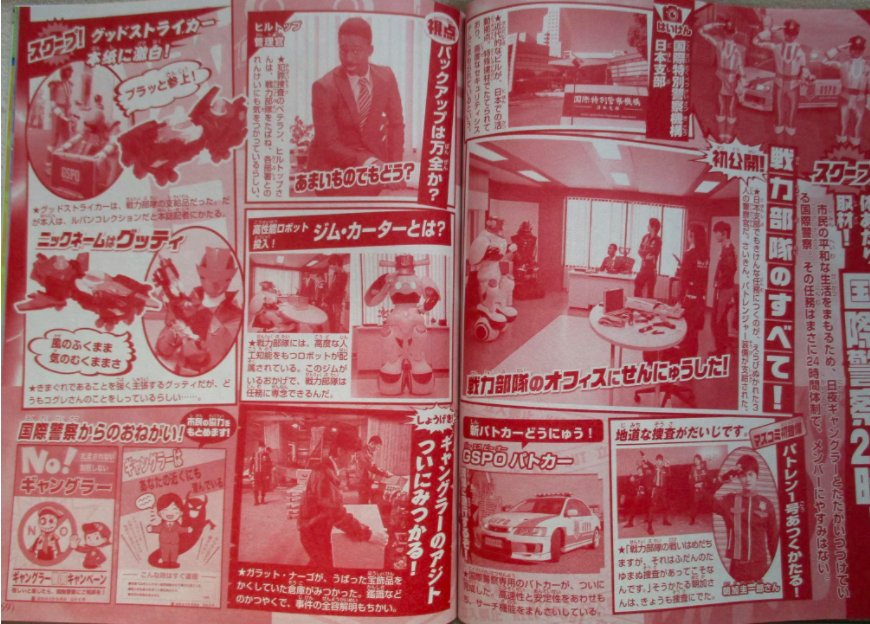 More on the opposing Patrangers, their GSPO publishes preventive ads against the Gangler, their boss, Commissioner Hilltop has a sweet tooth and is the one the team calls for backup. The team also has a robot named Jim Carter and finally, they followed one of the Ganglers, which lead to them discovering one of their hideouts. 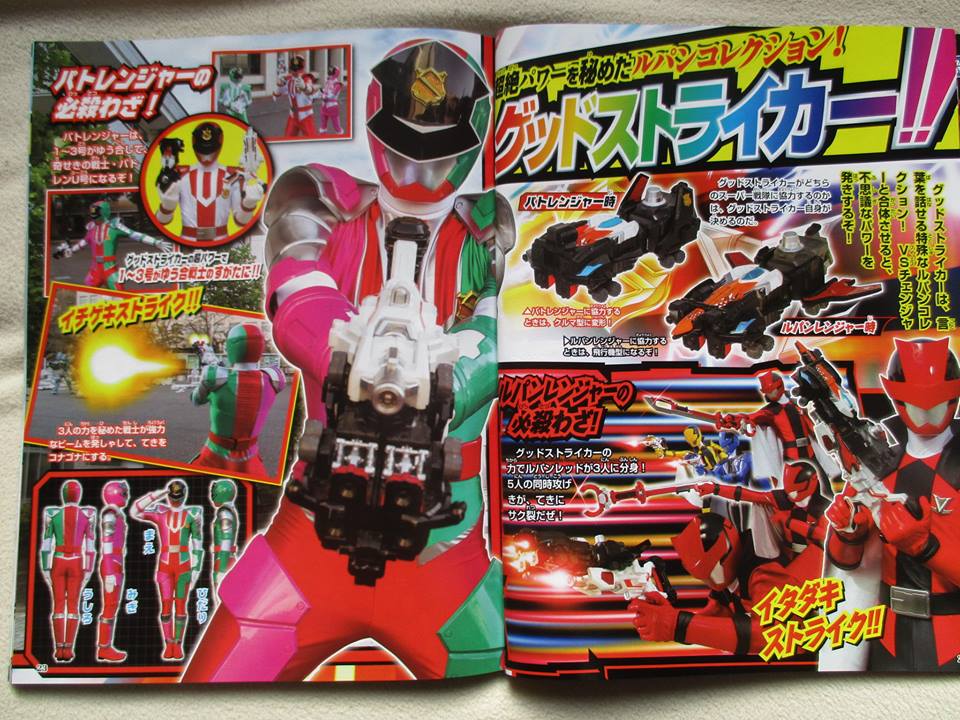 The Good Striker, this sentient mecha is also part of the Lupin Collection and can speak on its own. Depending on what it allies itself with, it changes form and abilities. For starters, once it teams up with the Lupinrangers and LupinRed inserts it to the VS Changer, it will create clones and perform the finisher, Itadaki Strike. As for the Patrangers, Patren #1 inserts it to the VS Changer will fuse the three Patrangers to form Patren #U and perform the finisher, Ichigeki Strike! 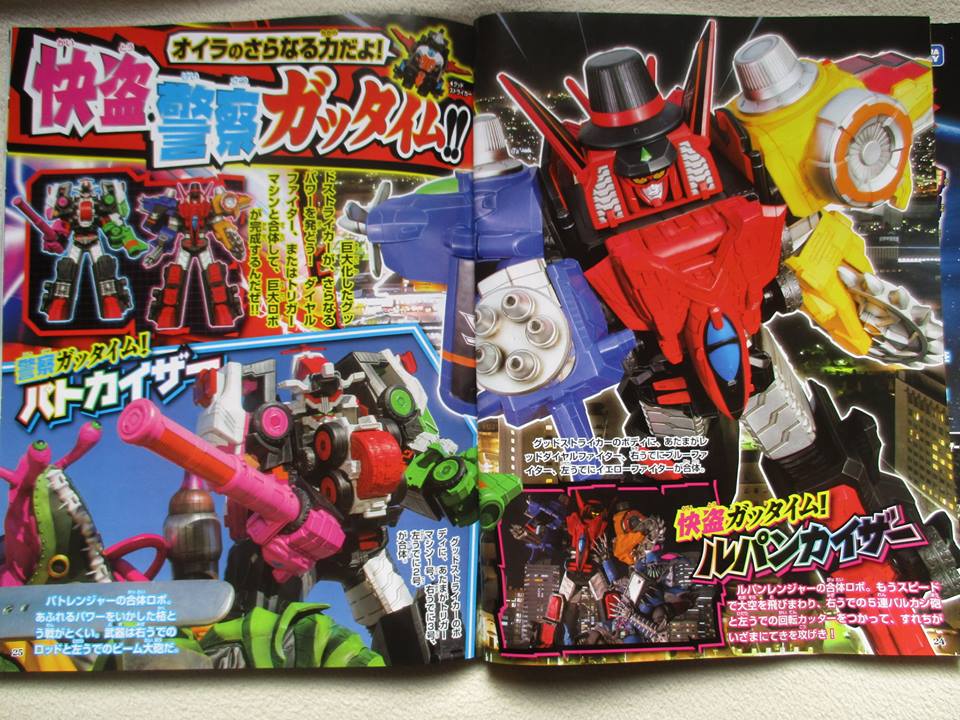 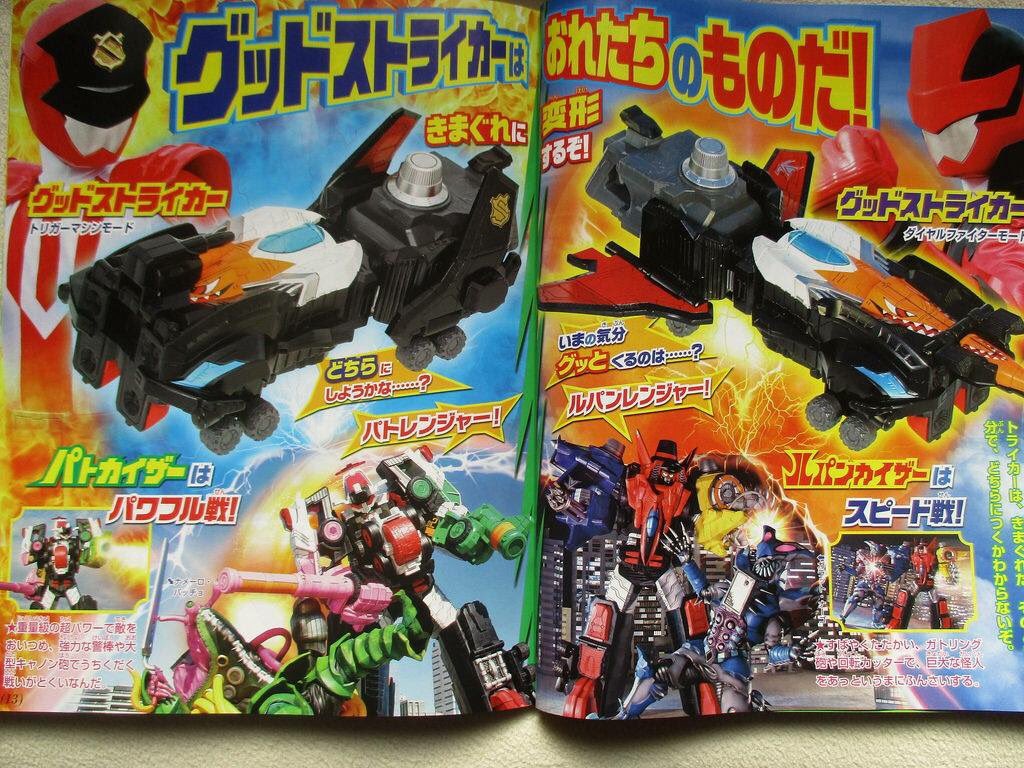 So the team shares the Mecha's components? That is different and written by Wizard's writer huh? That explains the Patrolrangers aid liking sweets. Their had better be a suger donut amongst his collection or I will rage.

Set in the future, a secret agency combines a newly discovered substance called "Morph-X" with animal DNA to create the Power Rangers Beast Morphers. The Rangers must fight off an evil sentient computer virus bent on taking over the source of all Ranger power, the Morphin Grid itself. Featuring never-before-seen leather suits and an all-new beast-themed arsenal (including dynamic new Zords), fans should get ready for a season full of secret ops and morphinominal fun. 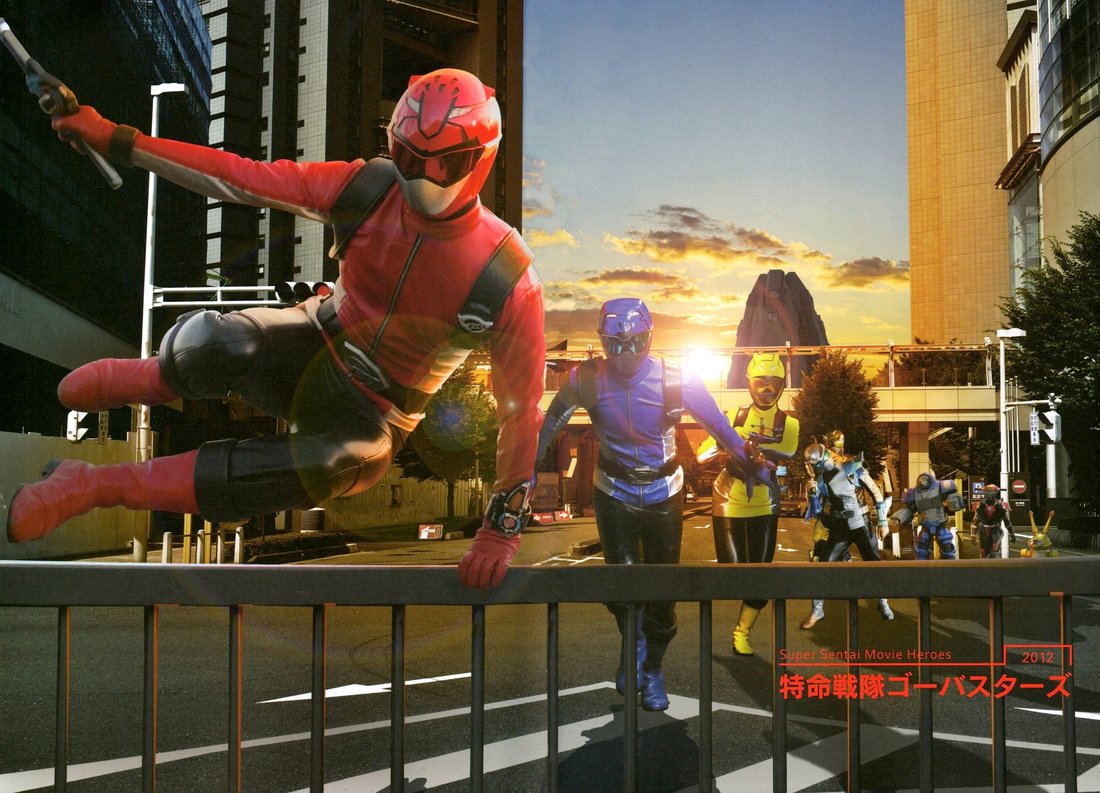 Based on the description, the series will adapt the 36th entry of the Super Sentai Series, Tokumei Sentai Go-Busters, a series that was skipped in favor of the following entry, Zyuden Sentai Kyoryuger. More on the series, Saban Brands CEO Janet Hsu states, "With 'Beast Morphers' we introduce fan-favorite animal themes with a new, intriguing special ops storyline that keeps the Power Rangers series fresh for viewers of all ages, especially the new generation of viewers."

Woah, woah woah... I thought this was a joke when I first heard about this. But it's actually real!? 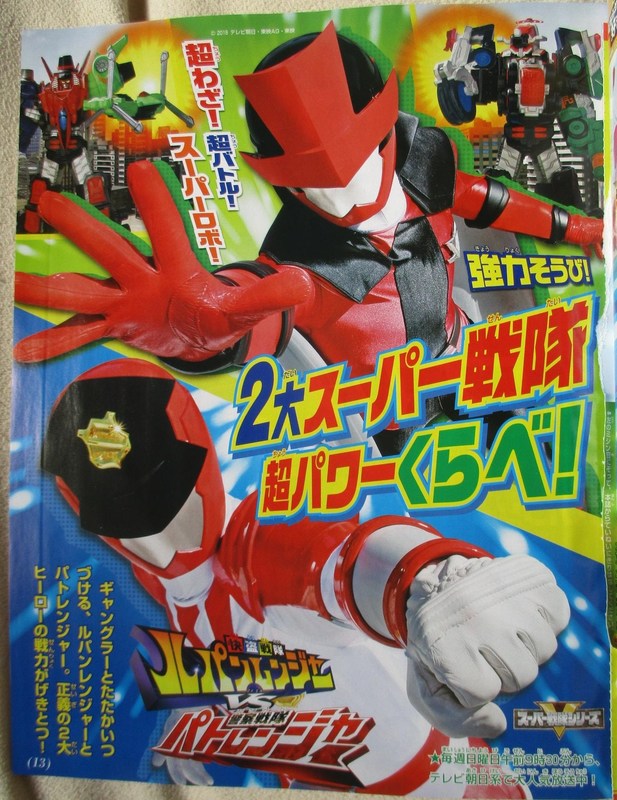 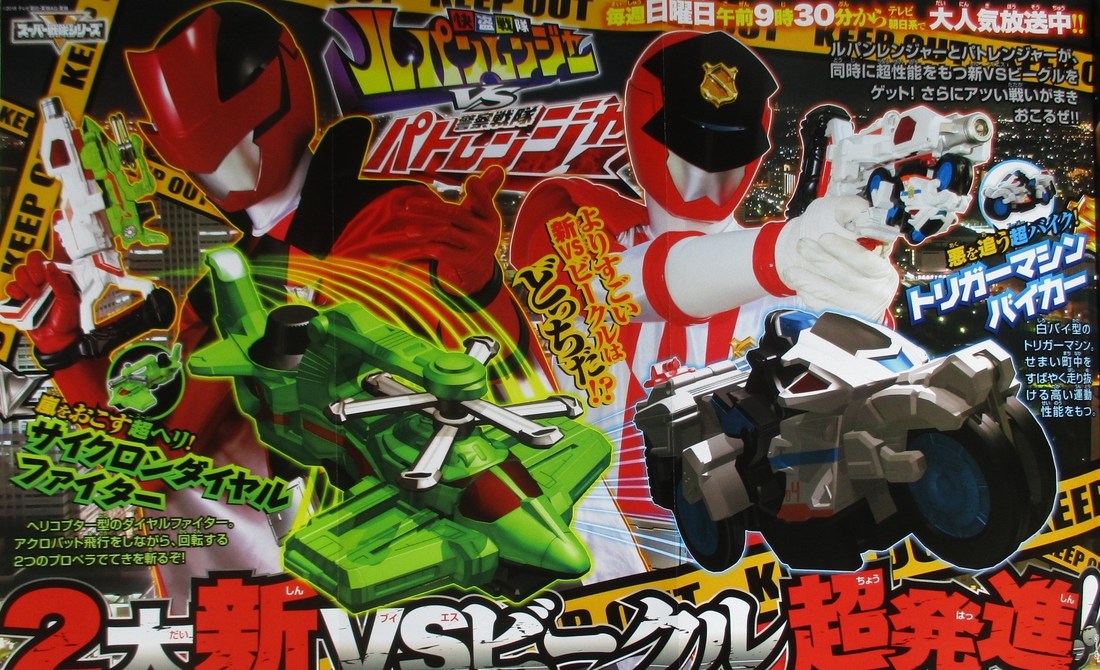 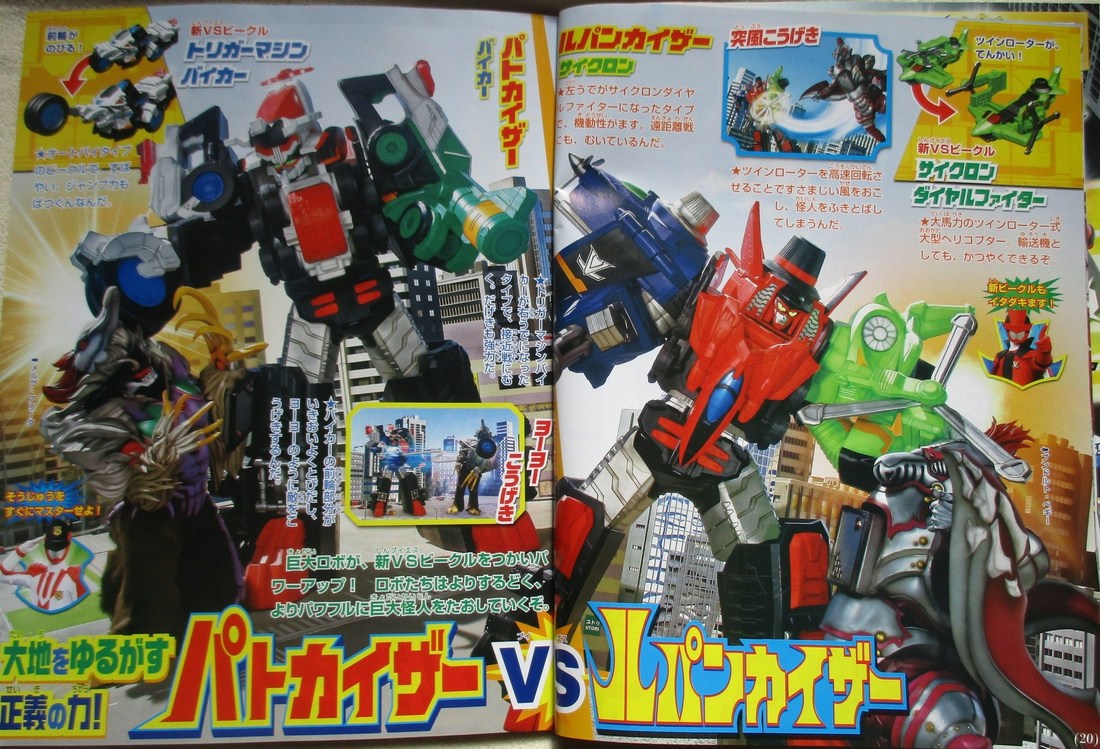 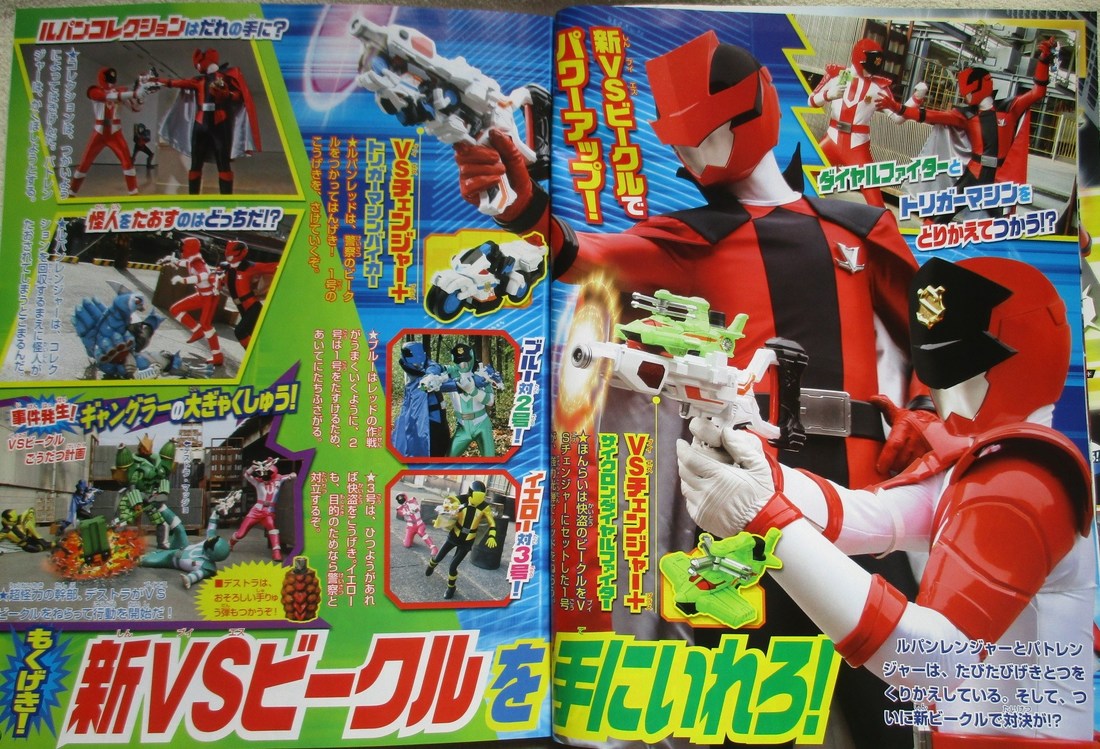 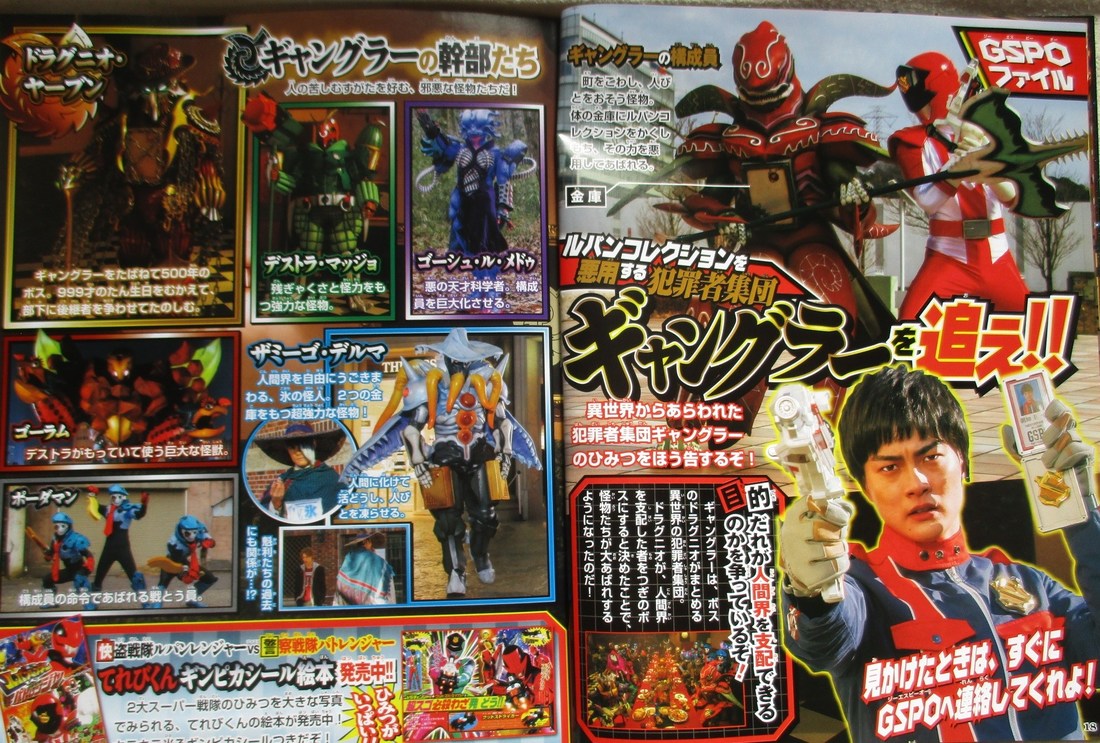 The latest issue of Televi-kun magazine has unveiled new mecha that will debut in Kaitou Sentai Lupinranger vs. Keisatsu Sentai Patranger this March! 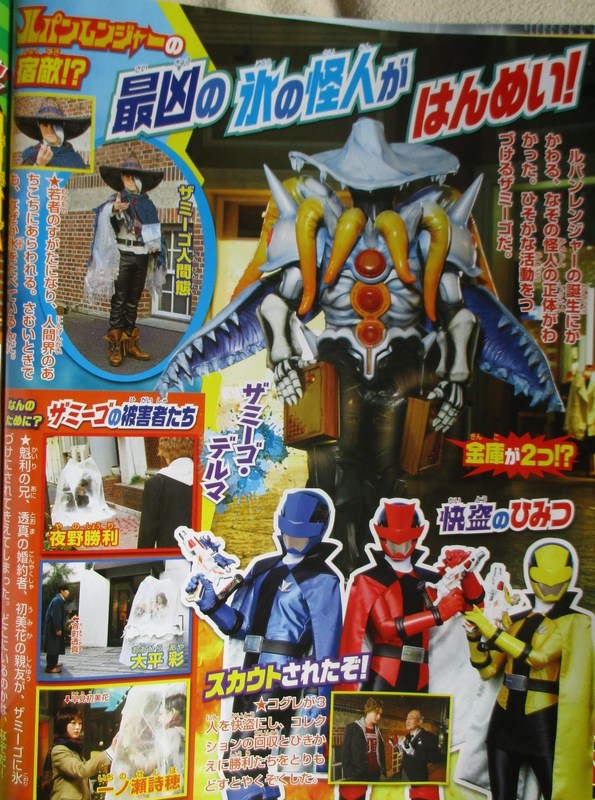 Finally, the mysterious Gangler who froze the people that are close to the Lupinrangers will make his presence felt. His name is Zamigo Delma and has 2 golden safes on his legs. Unlike your typical Gangler, he has a human form in which he wears a long string of white hair that covers one of his eyes, wears a sombrero, and loves to eat ice cubes. 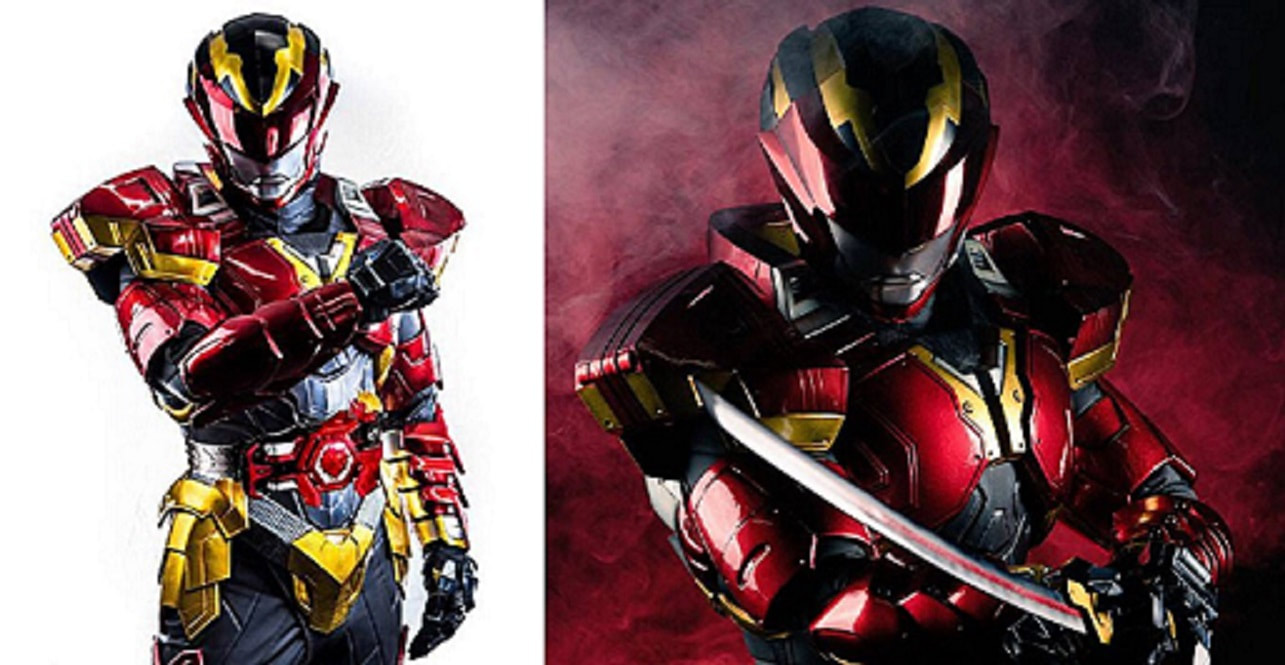 This new Kamen Rider is Kamen Rider Terra, one of the few Martians that survived after its destruction thanks to the power of the Pandora Box. His job was to guard the Pandora Box from those who planned to steal it... only to fail after an astronaut took said box and brought it back to Earth. Terra arrives on our planet to reclaim the box, causing him to fight the Kamen Riders 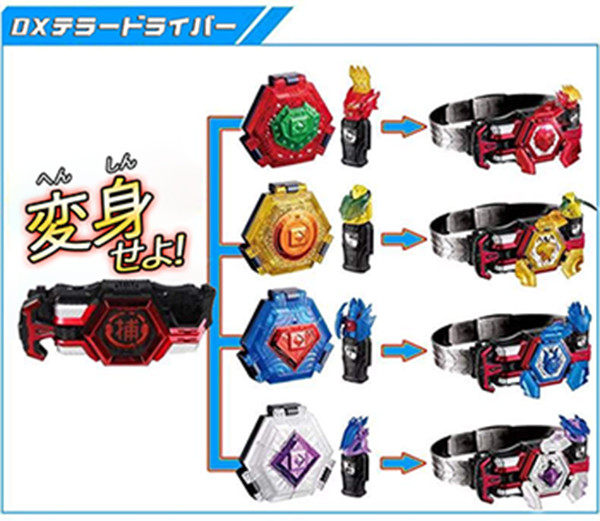 Unlike the Kamen Riders of Earth, he is equipped with the Pandora Driver, which requires two items for the transformation, a Relic Bottle and a Cap. A Relic Bottle is a primitive form of the modern Full Bottle. So powerful that its power cannot be contained without the Cap. Kamen Rider Terra has four Relic Bottles and its respective Cap, the Jaguar, Eagle, Raven, and Bahamut, giving him different forms and abilities.

His default form is the Kamen Rider Terra Jaguar Form, in which he inserts the Jaguar Relic Bottle and the Jaguar Cap in the Pandora Driver. This will announce "Kassei kara no chosoku dasher! Terra Jaguar!" which translates as "The high-speed dasher from Mars! Terra Jaguar!" Inserting a different Cap with a different Relic Bottle will cause an error message that says, "Baka-tare! Saba Jane-e!", which translates as "You fool! No dice!" before playing an explosion sound effect.

I like the Terra suit, reminds me of stream lined version of that Garuda Tokusatsu tv show. Speaking of Tokusatsu I've recently rewatched some of the Godzilla films and it still amazes me how they pulled off the sense of scale for the monsters. Heck the Showa era King Ghidorah is a insane idea pulled off near flawlessly. The creativety that goes into making these shows and movies is nothing short of brilliant.

The third quarter toy catalog for Kaitou Sentai Lupinranger vs. Keisatsu Sentai Patranger has surfaced online, revealing the two teams working together and the movie-exclusive mecha! 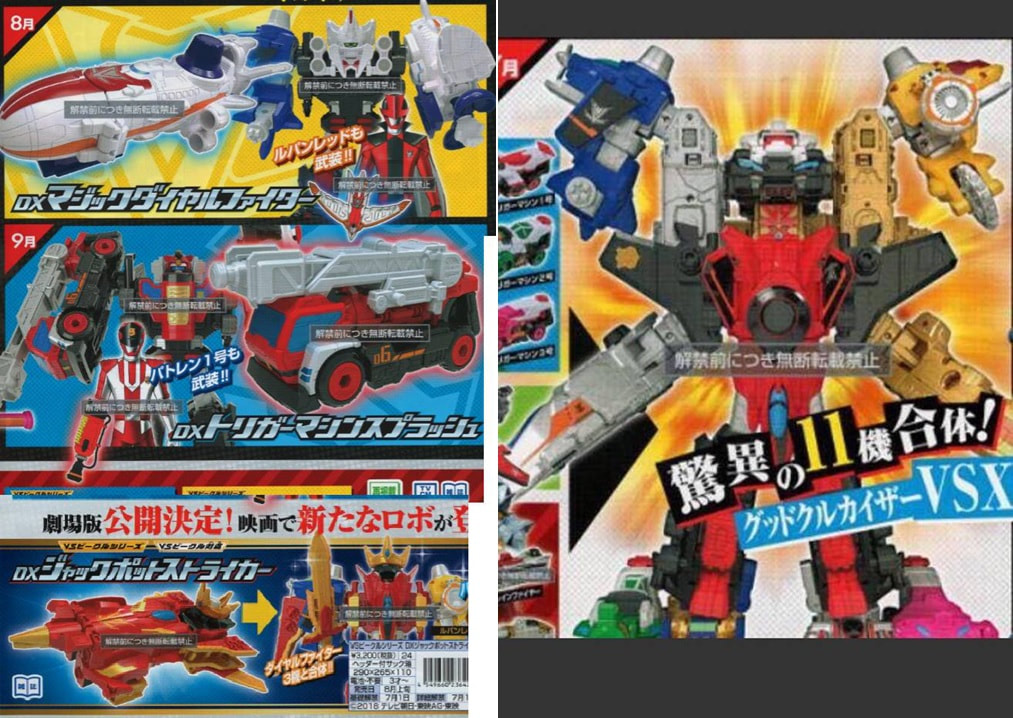 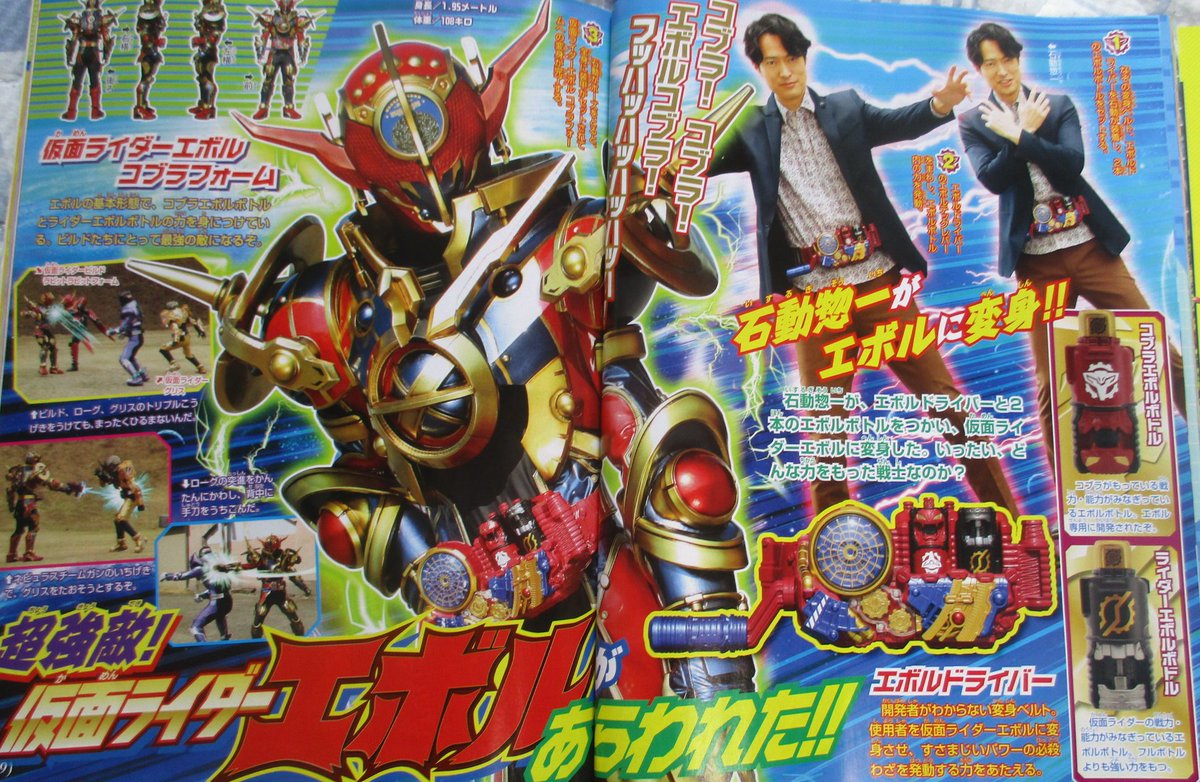 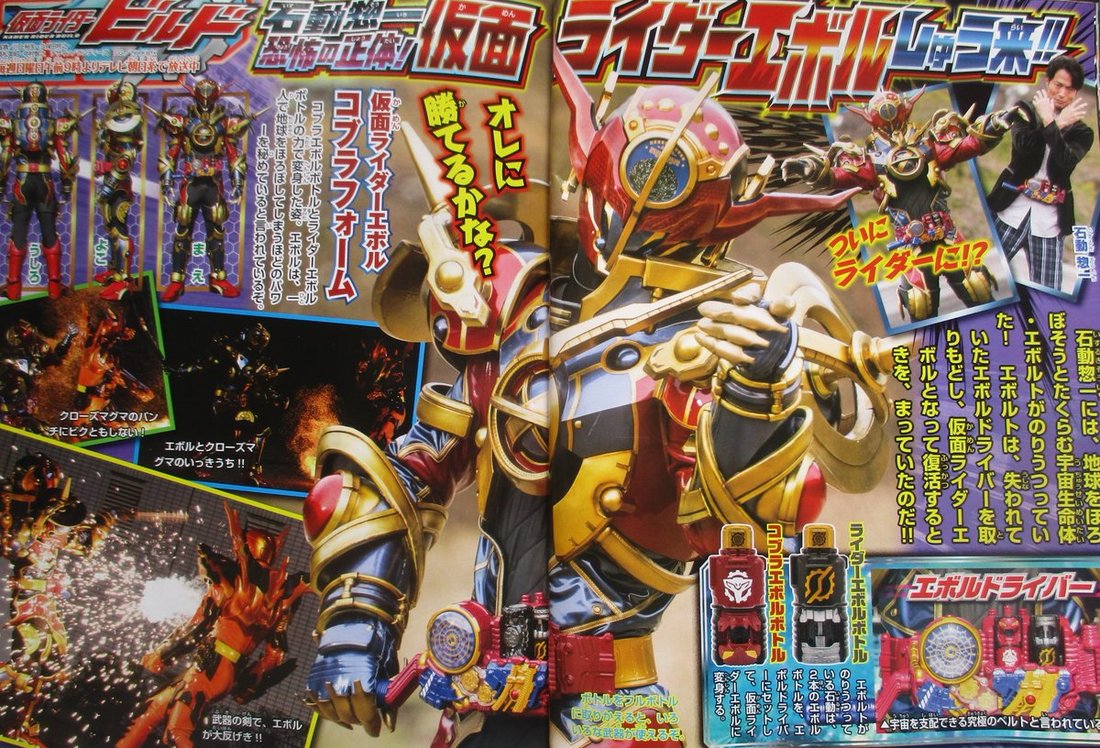 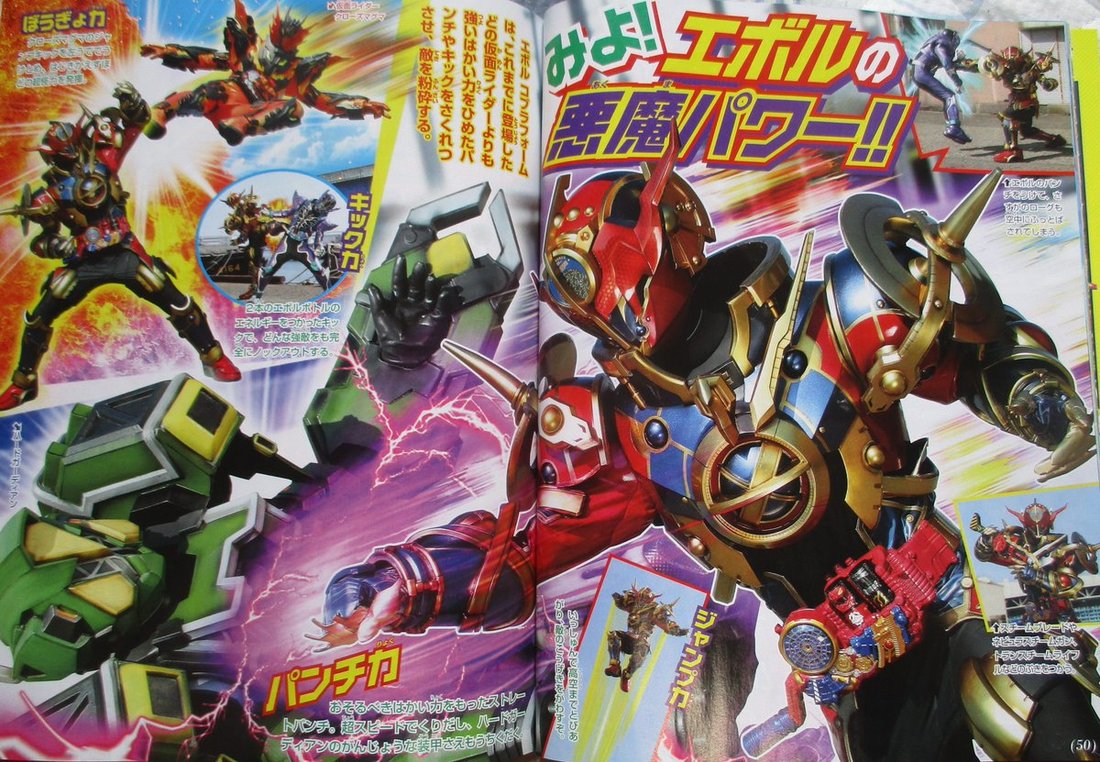 Souichi Isurugi is possessed by a Martian entity known as Evolt transforms into Kamen Rider Evol Cobra Form using the Cobra and Rider Evol Bottles and the Evol Driver! With this new form, even Kamen Rider Cross-Z Magma is no match for him! Evolt will use his all new power to destroy the world!

Kamen Rider Evol is a highly evolved warrior whose strength, speed, and agility is unmatched by no one! Thanks to the return of his powers, his kicking, punching, and jumping gained a significant boost! But that's not all, he also has two alternate forms that represent our main Kamen Riders, Kamen Riders Build and Cross-Z! 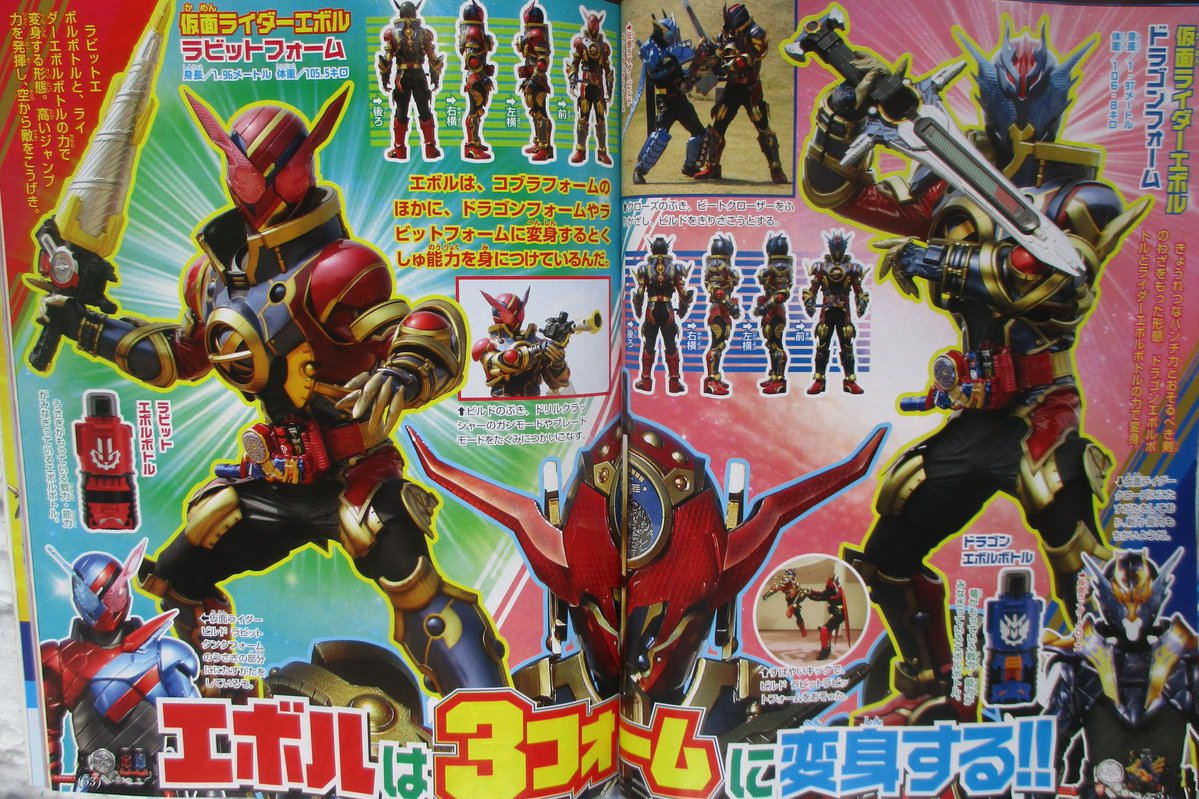 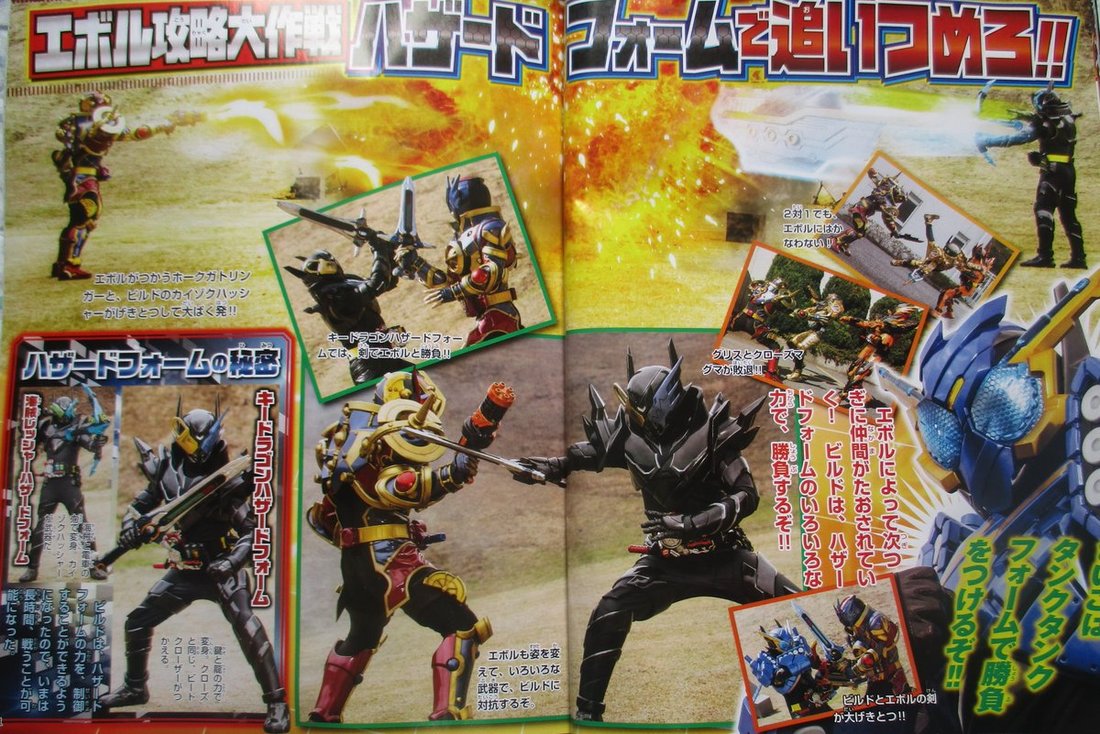 As to how this was possible, as it turns out, the Build Driver was based on the Evol Driver, which originated from Mars and was discovered by Isurugi. Thus, the energy they used is the same, allowing Evolt to use said power. The Evol Driver that we will see in the series was made by Takumi Katsuragi's father. Lastly, Kamen Rider Evol will face two of Kamen Rider Build's Hazard Forms, namely KeyDragon Hazard Form and KaizokuRessha Hazard Form! 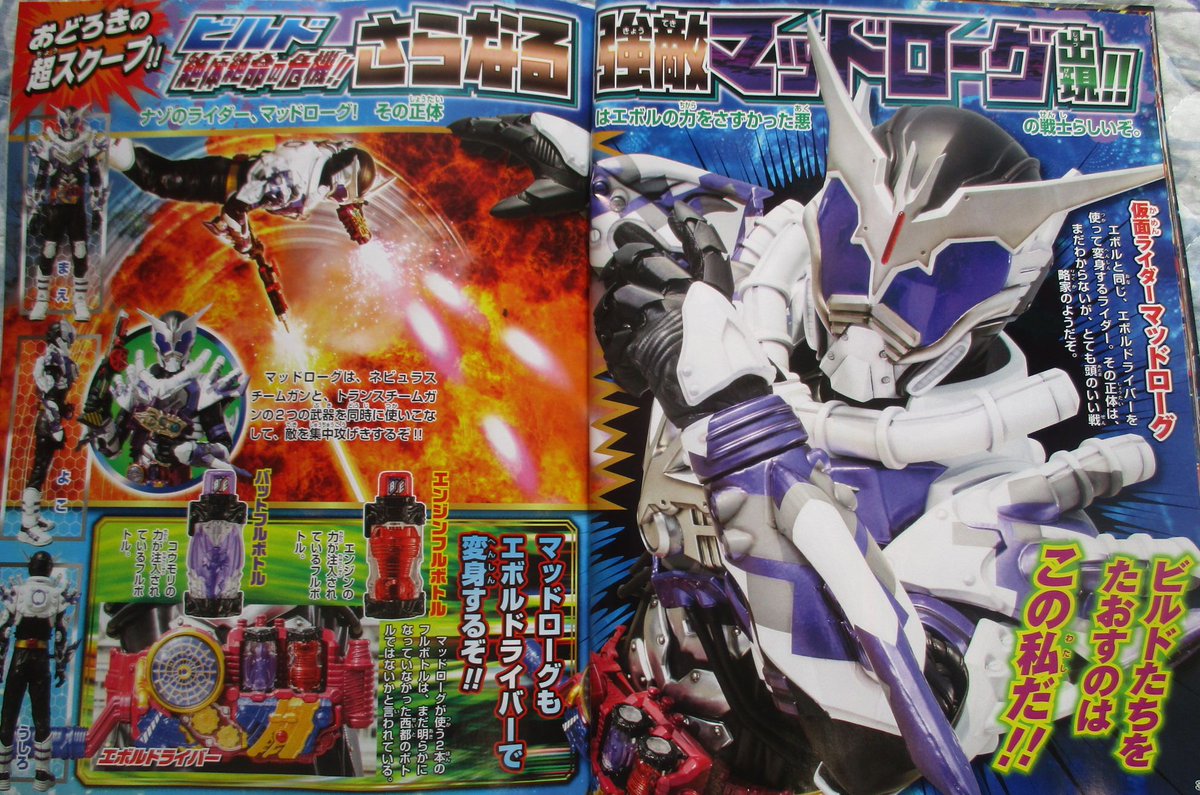 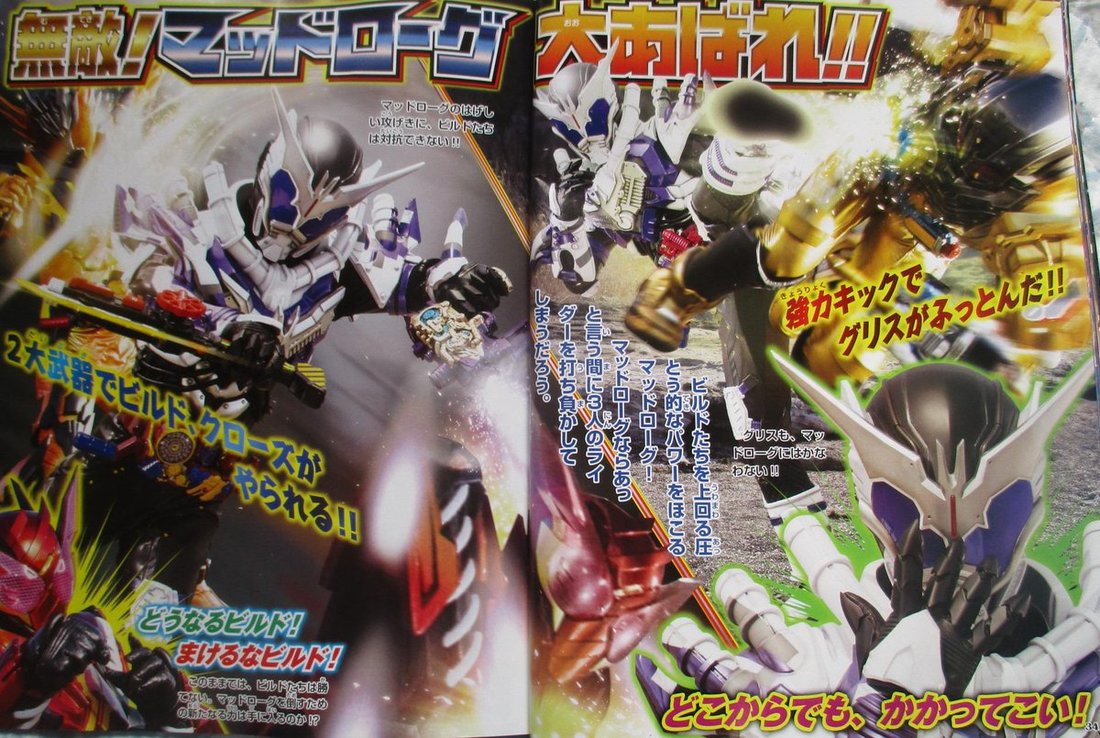 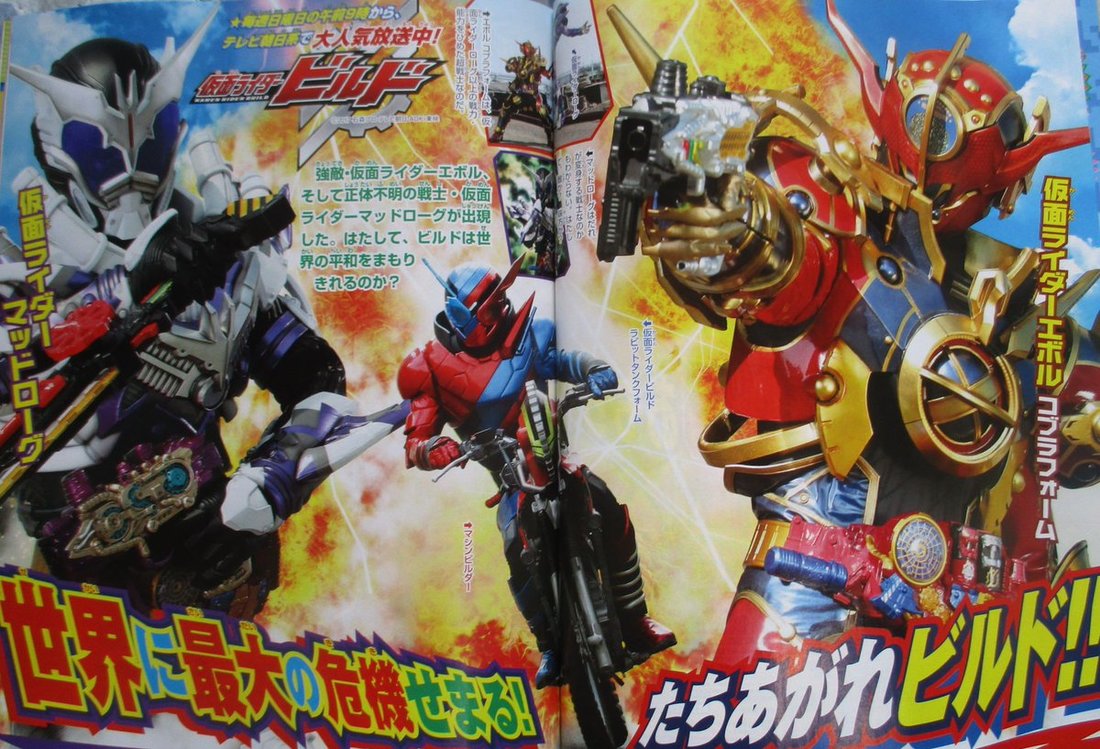 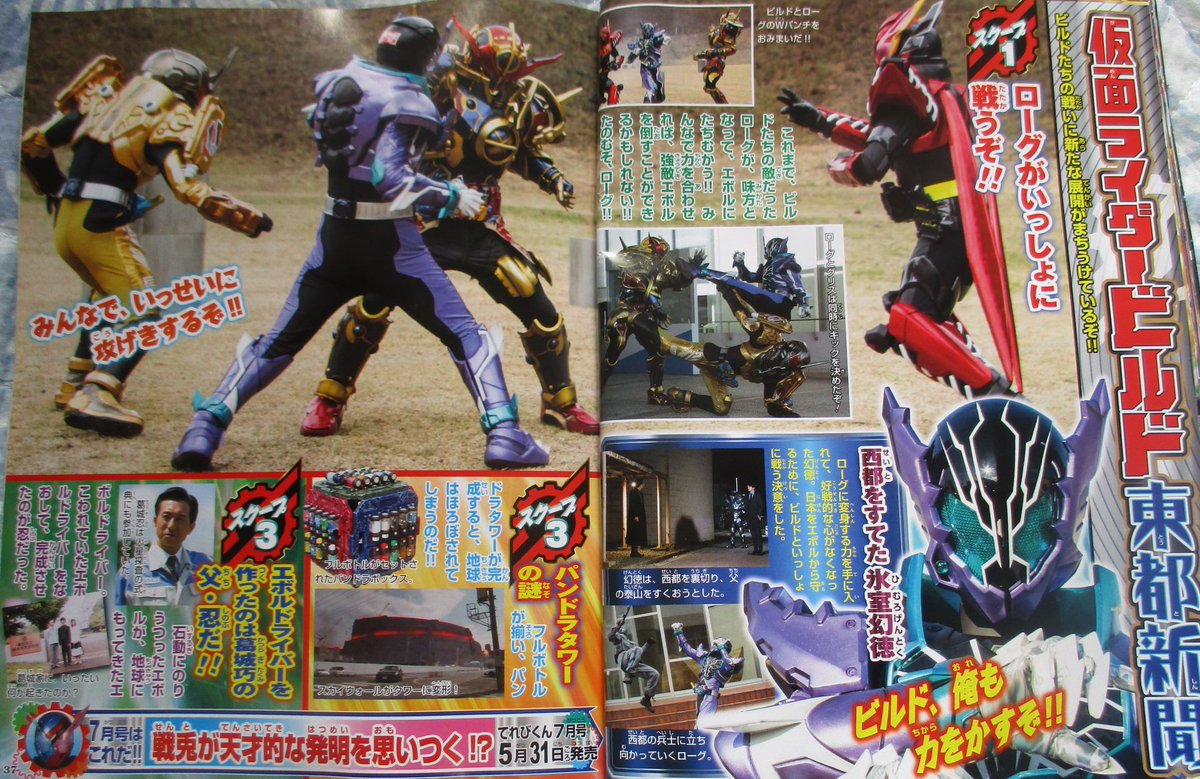 Finally, next month will also mark the debut of Kamen Rider Mad Rogue! This mysterious Rider also uses the Evol Driver to transform alongside with the Bat and Engine Full Bottles. He is also equipped with the Nebula Steam Gun and the Steam Blade. But the bigger question is, who is the man behind the mask?

Speaking of enemies, it seems that Himuro Gentoku/Kamen Rider Rogue will team-up with Kamen Riders Build and Grease! But the big question is, why he decided to team-up with the other Riders? What's are the secrets behind Evolt, Vernage and Banjou and how these three are related? And lastly, what's the mystery behind the Pandora Tower? That's for us to find out next month!

So well next Kamen Rider series title is revealed