I have S ranked all of DMC2, here are my findings, and notes.

I'v done the impossible and lived to tell the tale 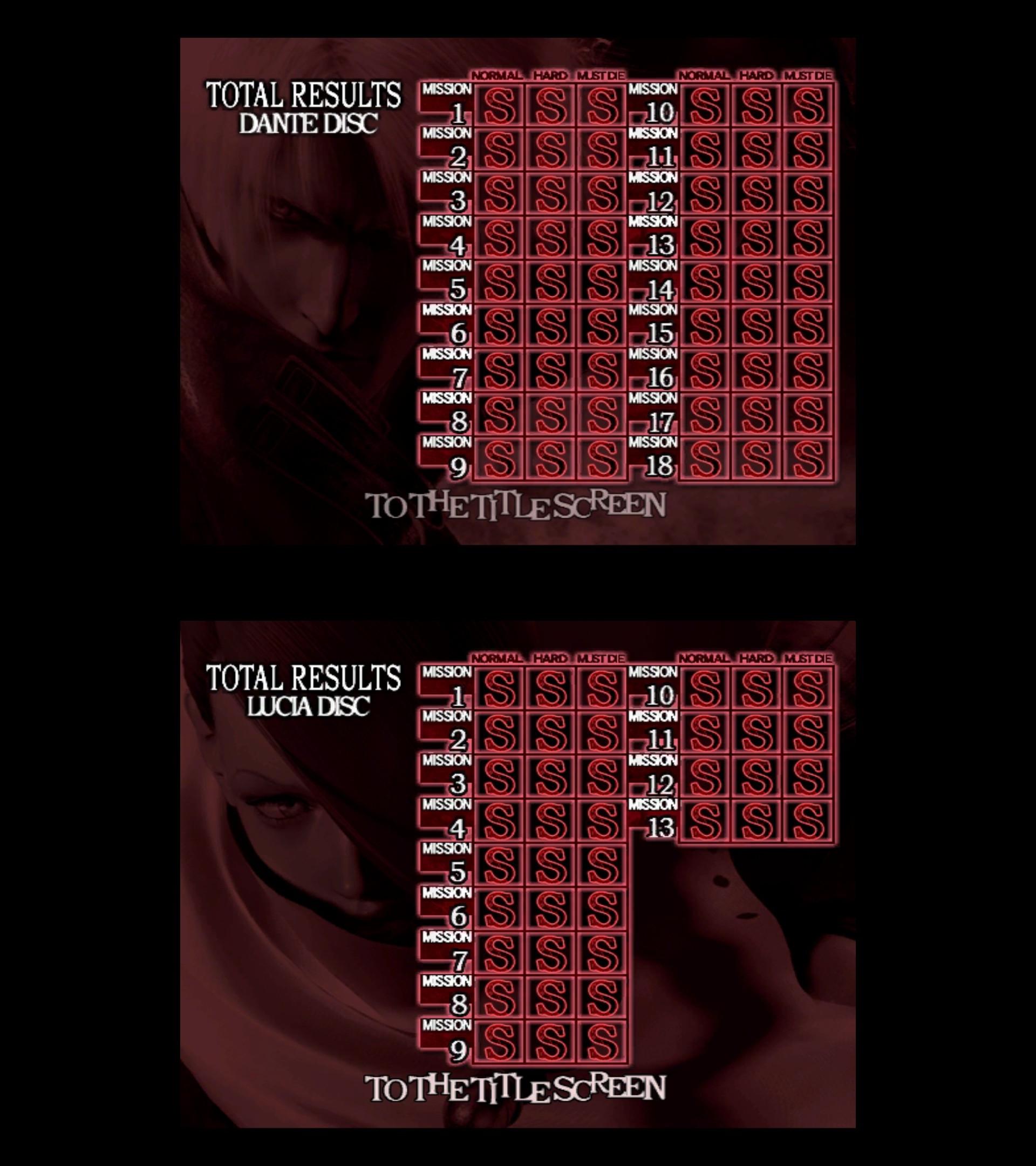 Now I can already predict your first response. "Why would you do this to yourself?" Because I could that's why. Also I wanted to make sure Someone actually did before DMC5 was released. I took my Dante Screen Shot on December 8th 2018 and my Lucia on December 18th 2018.
Also the fact that I don't actually hate DMC2 like so many others seem to helps, I find the atmosphere of the deserted ghost city infested with Demonic influences cool, and it feels like somewhere Dante as a Demon Hunter would actually need to go.

Now let me tell you, DMC2 may be easy to beat. But it is NOT easy to S rank. I'm not gonna pretend i'm a god, to be honest I had to use the Unlimited DT code. That sounds like cheating, But DMC2 doesn't play fair. I am Positive it's actually impossible to S rank Dante's Mission 18 on DMD without unlimted DT, it might literally be impossible to actually beat the level fast enough. Even when using unlimited DT I could tell these S ranks requirements were not play tested, DMC2 on it's own probably didn't have enough time to be fully play tested, they probably just made sure it was actually possible to beat the game without major glitching happening.

I got All these S ranks though testing the system in the game completely on my own, and discovering that way how it actually worked. I later got actual official details from a Japanese DMC2 guide, on how the system works from some kind DMC2 Speed runners I'v interacted with on a DMC discord. My findings from testing myself where pretty much right on the money, but it's good to of have the official info to fact check anything I was off about.

My finding have been recorded in a steam guide here. https://steamcommunity.com/sharedfiles/filedetails/?id=1753766220 It lists how the ranking system works in depth, the S rank requirements for all levels, as well as a few extra Tips and such I felt like sharing.
I don't have much of a way to get this out to people which is one of the reasons i'v come back to this forum, It would be a shame to have done all this work and have no one to show it too.
So if you ever get the chance I'd appreciate it if you shared my guide with anyone interested. You can even just copy all the info and post it else where, some credit and a link back to mine would be appreciated, But so long as those who wish to know about this information have ways to find it. Then that's good enough for me.
(Although this is DMC2 were talking about, so I seriously doubt anyone out there is actually dying to know how it's systems works)

I'v also created a guide explaining how to access the Unlimted DT code, which is available to anyone with the 2018 version of the DMC HD collection and is no longer PAL exclusive.
https://steamcommunity.com/sharedfiles/filedetails/?id=1337351091

I'v also made pretty much the only DMC2 mod just because I wanted to give Dante's Diesel outfit a more fitting color.

Nice to see someone else that doesn't outright hate DMC2! I've been on and off 100% completely the ps2 version for a while now and I can't even imagine trying to S rank everything.

meg5493 said:
Nice to see someone else that doesn't outright hate DMC2! I've been on and off 100% completely the ps2 version for a while now and I can't even imagine trying to S rank everything.

The best I can tell the systems in place are balanced for Normal mode, but there are some points in the game that just aren't polished right for S rank play, at the very least 2 mission which are clearly are borderline impossible on DMD/LMD, as I already stated Dante's Final mission simply takes way too long, for it to be with in the S rank for Clear time, maybe if you ration your Devil Star usage JUST right it's possible to kill both final bosses fast enough. but that goes against the idea of the game not wanting you to use items.

The other one that sicks out in my head is Lucia's mission 7 with the Fish boss Tateobesu, this thing would be a handful enough on normal or hard, but on LMD someone had the bright idea to make it invisible for the entire fight which means you can never lock onto it. There aren't enough enemies in the level to balance your style average (unless you have the extreme foresight to save just the right secret mission for this level), so Trish is the only one who has fast enough water combat to actually raise the style rank during the boss, and you have to be lucky enough, or know the trick to get it stuck such a way where you can hit it consistently but it can't hit you.

Another lesser problem is the mission where Lucia gets the Evil Heart that drains your health, that effects your end ranking for the level, you can negate the health drain by using the Healing heart, but it's impossible to stop it from doing 1 small dink of damage. meaning the S rank for Damage on that level is impossible at best it's an A.

If Infinite Devil trigger wasn't a thing in some versions, then I doubt it would even be possible to S rank the whole game at all, and even if it is with out unlimited DT it would take extreme luck or exploiting, not reasonable skill.

As i'v stated I still enjoy DMC2 for what it is, but there is no denying that I can actively feel it's troubled development, when I was doing this challenge. Still regardless of all of DMC2's problems I'v found it very fantasizing because of those Problems. the very same problems I notice must have been problems the Development team noticed too, but they were too busy trying to actually make a ship-able product in the first place, every problem they had the hindsight in how to fix afterward was taken and used to make DMC3 as great as it is.

As someone who also doesn't hate DMC2 with a burning passion, this is very interesting. I might delve into some of this info myself when I get the time.

I'm surprised that the game is as good as it is, considering that it basically only got 4 months of actual dev time. I doubt I could crank out a working game in 4 months, let alone one as enjoyable as DMC2. Heck, if it wasn't a DMC game I bet people would even say it's pretty good.